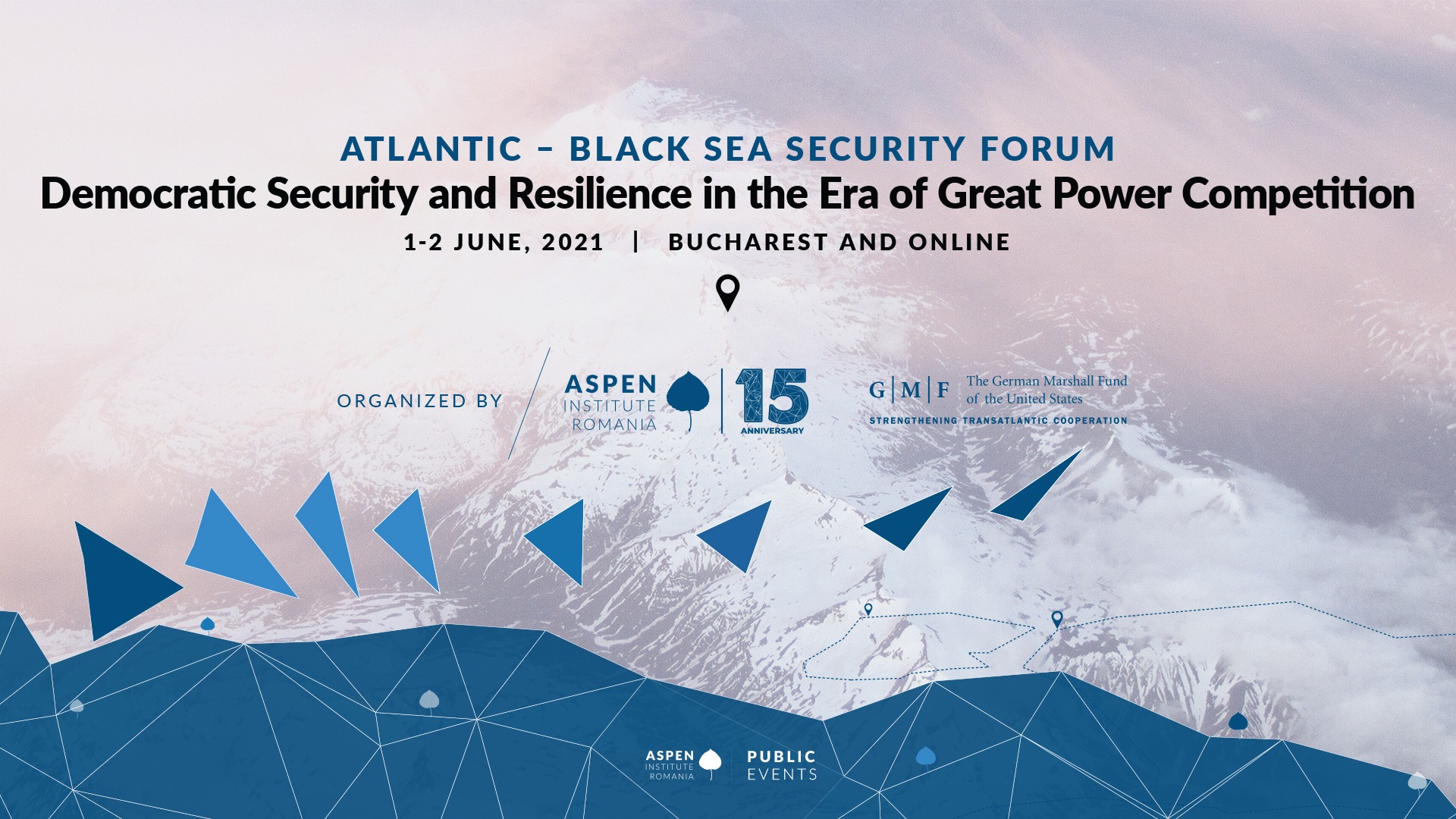 Democratic Security and Resilience in the Era of Great Power Competition
June 1-2, Bucharest and Online

The Aspen Institute Romania in cooperation with the Bucharest Office of the German Marshall Fund of the United States will organize the 3rd edition of the Atlantic – Black Sea Security Forum on June 1 -2, 2021, in a hybrid format. The Atlantic – Black Sea Security Forum is a high-level international event dealing with most ardent topics on the international security agenda. This year’s edition will discuss technological advances and their impact on security, with a focus on resilience in the Black Sea-Mediterranean Sea conundrum and beyond.

The decade started on a new reality that encapsulates a transformed definition of security as a global, comprehensive construct. COVID-19 was just one reminder of the global inter-connectedness, and the fact that no one is safe and well until everyone is.  Hence, the whole-of-society approaches are dogmatically embedded in every reflex and requirement of the current policies.  An increasing sense that security prerequisites must be formulated by grass-roots needs is driving a legitimate claim for improved resilience.  Cooperation and competition are reassessed by prescriptions that center on well-being of communities, societies, and environment.

The new reality is a complex of systemic challenges:

Political and social vulnerabilities are deepened by extremism, disinformation, and caveats to confidence building that feature in individualistic foreign policies.  Economic tensions accumulate as markets shift, supply and value chains are reassessed, and risks reshuffle as society claims a wider redistribution of profits and interests.  Besides traditional risks associated to the sanitary and functioning of health sectors, the pandemic casts uncertainty on effects of mental and physical well-being of our populations on the long-term and generates an open-ended discussion on the prospects of socio-economic recovery.  Defense and hard-security are complicated by ever-intricate geo-political shifts, aggravated by persisting use of hybrid tactics and emergence of disruptive technologies.

Therefore, we require a new approach to security, peace and prosperity: more strategic regional equations, increased participation in sustainable action by multilateral fora, and creative use of societal levers to generate resilience.

The frantic new world provides, sometimes on the very opposite side of the coin, multi-faceted opportunities:

A renewed sense of strategic predictability is expected upon the new US Administration taking office, which translates into political optimism in regard to the transatlantic bond.  Co-opetition between US and EU is prone to be replaced by strategic cooperation providing impetus to a reviewed equation of global great power competition.  EU and NATO are both embarked on strategic reflection processes through which their rich memberships will shape regional and global governance and assume adapted tools of collaborative security. Both NATO 2030 and the subsequent allied consultation for an updated Strategic Concept, and the EU Strategic Compass will formally begin in the summer of 2021.  Their strategic alignment and a deepened sense of coherence is key for the next phase of Euro-Atlantic socio-political development as well as for the transatlantic cooperation. Besides tighter alignment of free-market democracies and a coordinated multilateral approach, the strategic partnership would need to also focus on stabilizing the more fragile regions with a view to supporting institutional capacity building, including from a security and defense perspective.

Political energy converges in developing resilience as a whole-of-society remedy to current risks, threats and systemic vulnerabilities.  In the new world, governments ought not only to take onboard the needs of civil society, private societies and international community, but to design policies which ensure equitable dividends to these societal stakeholders.  Hence, enhancing democratic and societal resilience is the reflex to shouldering the burden of governance and mitigating risks, bridging divisions and empowering avatars of diversity with greater consideration for public perceptions and attitudes toward security matters, adversaries, resources and security arrangements, as well as the factors that can shift these attitudes.  By all indicators, resilience is expected to be the champion topic of cooperation between NATO and EU, which will equate to an even more momentous development of the concept and a definition of that will prescribe the essence of Euro-Atlantic security for the next decades.  Therefore, strategic anticipation and foresight are becoming critical instruments of non-military power and decision making as we aim to steer the necessary transitions in a sustainable, fair, and democratic manner.

Technical development and digitalization continue, even more forcefully, to be disruptors of entrenched paradigms and to dynamize foreign and security relations. Paradoxically, this phenomenon is somewhat of a reaction to the need of extending the scope of the protection of our policies to the essentials of the people and the planet, as well as an upsetting factor of the current fragile socio-political and security balance.   As an unexpected social remedy of modern times, technology is a democratizing instrument (i.e. internet alone) – a tool that both opens societies and cements stakeholders’ social-democratic approach.  As a disturbing amplifier of distrust and systematic vulnerabilities, technology is testing the very resilience of our societies – from decision-making to civil and military preparedness, from crime fighting to providing healthcare, from disinformation to malign involvement of foreign actors.  Thus, emerging and disruptive technology represent a matter of great political relevance. The transatlantic dimension of the cooperation in this field appears to be critical as well as the debates revolving around both ethics and relevant funding models related to its development.

A new strategic look at regional approaches to security is imperative. As new strands of transatlantic cooperation are revealed, as NATO and EU are discovering refined objectives through ample processes of adaptation, as Russia and China are aiming to enhance their roles at regional levels, especially in those areas which are adjacent to the Euro-Atlantic community, we need to grasp a better understanding of our role in the Black Sea and the Mediterranean.

The geo-strategic calculations now render the Black Sea region as a springboard onto the Mediterranean and wider MENA region. A continuum of threats and challenges are derived from the strategic interests of the more prominent regional actors from East to South.  From this juncture, regional actors project power and fuel conflicts, such as those in Syria and Libya, that impact global stability.  Here, concerns about land and maritime territorial defense converge.  Competing factors of destabilization weaken the capacity of cooperation.  For these reasons, The Black Sea and the Mediterranean need to be addressed in a wider perspective; one that unifies actions in and approaches and accounts for the specific of the region.

This edition of the Atlantic Black Sea Security Forum will address these new challenges in a wider regional outlook. It will allow for a deep, high level conversation and encourage a wider strategic and regional perspective. The needed interaction and coordination between international organizations, first and utmost NATO and the EU, in the face of the new realities will also be explored.

The Atlantic Black Sea Security Forum will also be designed with an enhanced focus on resilience, capitalizing on the potential of the region to constructively drive the development of the concept and its parallel implementation.  Wider South-Eastern Europe has, along past decades, gathered an incommensurable mass of expertise in dealing with threats and risks that stringently test the resilience of our societies, institutions and individuals.  Our current resources derive not only from retrospection and introspection, but also from a well-defined sense of prospection.  Through initiatives such as the Romanian hosted Euro Atlantic Centre for Resilience, our region is assuming a leading role in expanding the resilience agenda with a view to balancing the dualism of national-international efforts and a seeking greater connectivity between NATO and EU.