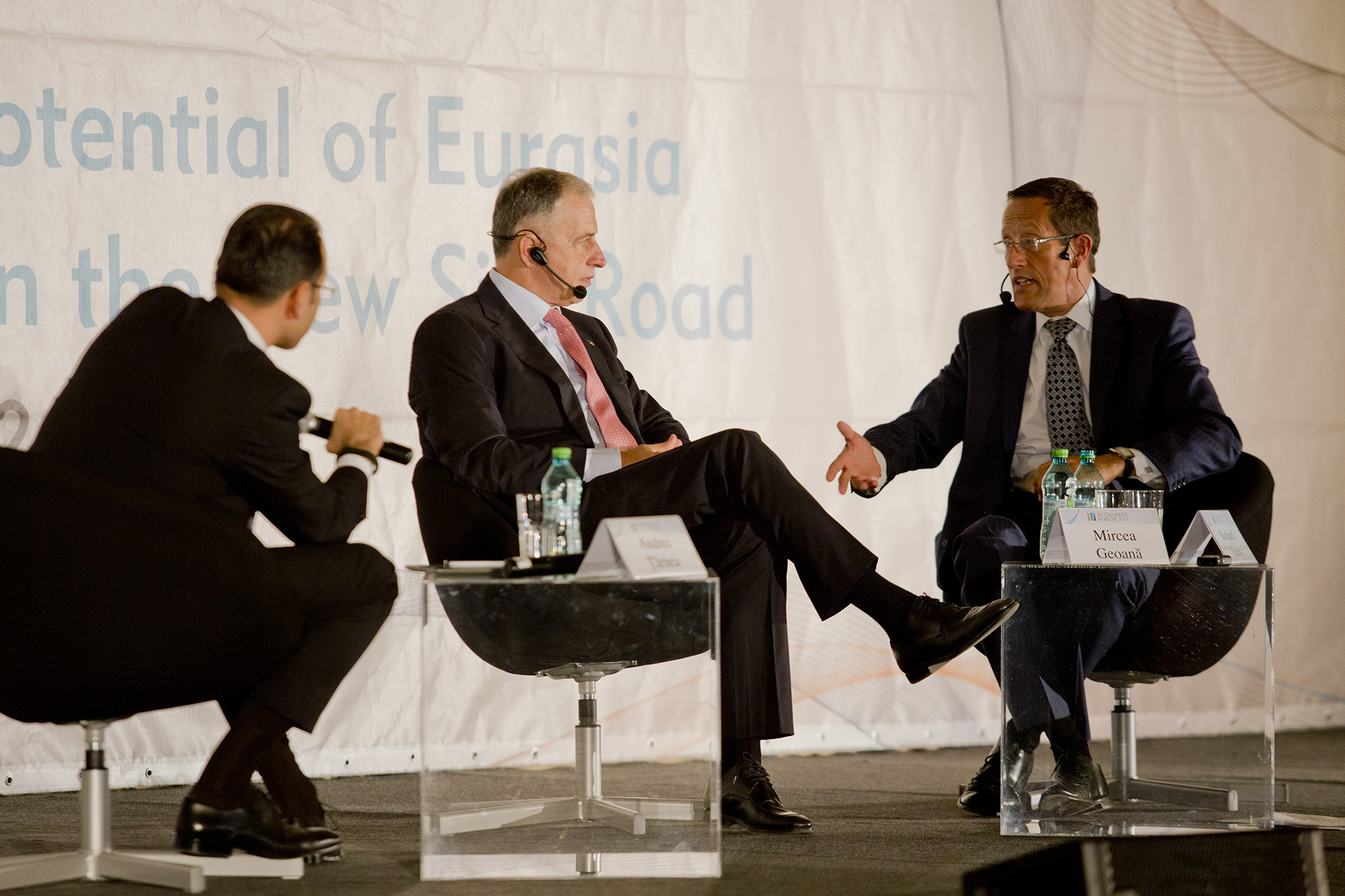 The Bucharest Forum is a landmark economic and strategic policy event, jointly organized by the Aspen Institute Romania and the German Marshall Fund of the United States in partnership with the Romanian Government and the National Romanian Bank.

The mission of Bucharest Forum is to create a regional platform for forward thinking economic policy and for political dialogue between governments and business. The Forum is a direct result of Romania’s renewed determination to enhance its strategic and economic potential as a gateway between East and West.

At its third edition this year, the Bucharest Forum is becoming the largest and most important policy gathering dedicated to the Eurasian link at the Black Sea. Its design balances strategic and sector specific questions and issues in conversations geared towards practical solutions. This edition of the Bucharest Forum will be a large scale, trans-regional event, building on the success and relevant work of its prior editions, contributing to the synchronization of EU and US perspectives and policies on the East West corridor linking Europe and Asia. 350 participants from 20 countries along the New Silk Road, from EU and the US, coming from government, business, financial institutions and academia are expected to plot a course for regional success, despite current setbacks and challenges.

The Ukrainian crisis focused trans-Atlantic attention to Eurasia, as it revealed regional vulnerabilities. At the same time, the crisis offers a good opportunity to rethink the approach to the region and to tap into its economic and social potential. The countries connecting Asia to Europe, the East-West corridor, brings incredible opportunity for investors in the medium and long term, but also a difficult to understand short-term perspective. Bucharest Forum aims to be a tool at understanding this region’s complexity and revealing its potential.

This year marks the 25th celebration of the fall of the totalitarian regimes that marked the XX Century. At this year’s Bucharest Forum, taking stock of major changes shall be an impetus for looking into practical ways for a renewed ambitious agenda for reform and lasting success.

11:15 -12:45 Unfettered Area of Growth and Investments (on the record, open to press)
Asia and Europe are the only continents that have a land connection. The geography of the Eurasian continuum has historically led to overlapping trade routes generically named the Silk Road. These have shaped cultures and civilizations for millennia. Conflict and politics have at times stopped this flow of commerce, knowledge and capital. Today we see a re-emergence of a New Silk Road. Strategic and economic development perspectives compete and even clash along this Eurasian axis. This is not lost to the critics and to those skeptic about the feasibility of an ambitious trade and investment continuum in Eurasia. Countries along the New Silk Road face many political and security challenges, yet they all have an important economic potential. The Road itself, connecting the European and Asian markets and industries, would generate growth not only at its geographical ends, but along its entire course. The entire New Silk Road area has an economic potential waiting to be unleashed through strategic investments that would generate generous returns. This however is not automatic and requires a minimal shared interest. The session will look at the economic potential of the NSR, at the investments that would generate its development, and the economic benefits these would bring. Equally the panel will explore the main difficulties and obstacles to unfettered growth via investment along the NSR. From Romania, a country that represents the western anchoring of the New Silk Road on the Black Sea, the ambition is that of serving as a Gateway on the NSR. National, European and regional policies and private investment all converge toward the opportunity created by growing trade, energy and manufacturing opportunities.

14:00 – 15:30 One Road for Many Itineraries (on the record, open to press)
Eurasia and its development through a New Silk Road strategy is in the interest of several international actors, who each would stand to benefit from a stable, secure and prosperous region. The EU, the US and China, among others, have direct interests, both strategic and economic, to see this strategy to a successful end. Given the complexity of the region and its geopolitical importance, success can only be achieved through support from and with the implication of these actors. The panel will look at the opportunities the NSR would bring to the EU, the US and China, the obstacles they are facing in promoting the NSR strategy and the short and long term actions needed to secure and stabilize the region.

15:45 – 17:15 European Energy Security – Winter is Coming
Russia, one of Europe’s main energy providers, regularly threatens to cut off gas supplies, and seems more determined to do so in connection to the events in Eastern Ukraine. Europe is slow in developing alternative sources of energy, while national interests of member states constantly prevail over European collective interest. What are the prospects of a serious European energy security strategy? What changes are needed to push it forward? How can Russia be pushed out of a zero sum game and into the role of a reliable and trustworthy energy provider?

11:45 – 13:45 Romania Gateway – Boosting Competitiveness, Sustaining Growth
Romania Gateway is a strategic project of national interest, implemented through a public-private team aligned with a new Romanian economic growth and governance model. The establishment of Romania Gateway creates the institutional space for unprecedented public-private cooperation and coordination. The project’s ambition is to set a clear model of accelerating Romania’s economic growth to 5% per year, for a period of at least 10 years. In the following period, the project intends to present the situation of the main pillars for the economic growth in Romanian. To this extent we will focus our debate on the main economic sectors of Romania. Within this panel a number of positive key initiatives will be presented as a potential model for enabling growth in Central and Eastern Europe.
● Mircea Geoana, President, Aspen Institute Romania
● Nicholas F. Taubman, President of Mozart Investments, former US Ambassador to Romania
● Catalin Pauna, Senior Economist, World Bank
● Tomas Spurny, Executive President, BCR
● Nikolai Beckers, CEO, Telekom Romania
● Daniel Badea, Managing partner, Clifford Chance Badea
● Nicolae Albu, Advisor to the President of EximBank, Aspen Fellow 2011
Moderator: Vasile Iuga, Country Managing Partner, PwC

Investment, Trade & Infrastructure Development along the New Silk Road
The Silk Road is often and for good reasons perceived exclusively as a strategic corridor. Connection between Asia and Europe is still cumbersome, lengthy and expensive. Development of strategic infrastructure along the NSR would make this connection faster, more secure and productive. While some projects have taken off the ground, others are needed or await financial or political decisions. The session will look at the current stage of infrastructure development along the NSR, at the pipeline of infrastructure projects and at the role and possibilities of main actors in the field. At the same time it is increasingly a major trade and investment driver for all the economies in the region. Energy on one hand and manufacturing and transport of goods at the other spectrum are shaping the economies of NSR countries. With trade and investment as driving factors for many economies along the New Silk Road, a discussion between policy makers, analysts and investors is required to better understand and assess how development can be more beneficial for all parties involved. Trade agreements and free trade negotiations regionally or globally are also shaping the prospects of a NSR. Russia, China and the EU are all involved in such negotiations not to mention WTO. Removing barriers and increasing both intra and cross regional commerce can be a stabilizing factor and a driver of economic and social development in Central Asia and along the NSR. Trade negotiations, infrastructure development and investments along the NSR can also play a role in addressing existing strategic rifts and even make competing perspectives and interests more aligned.

The New Energy Game in the Greater Black Sea Area (roundtable conversation)
Recent developments in South East Europe create the conditions of a new wave of Foreign Direct Investment, in these conditions a stable coordinated effort in the region is necessary in order to create a common set of regional energy policy principles and establish a catalyst for the process of establishment of regional power market. In these regard reshaping the energy sector in the region needs a comprehensive debate on issues like the new energy security context, energy market fragmentation and the future generation capacity.

16:45 – 18:15 Getting Out of Less Than Zero Sum (hard security) (on the record, open to press) –
Russia’s resurgence has changed the dynamics in European neighborhood, and nuanced the security narrative in Europe. It also generated an albeit timid debate about European security and its solidity, and the importance of the Trans-Atlantic relation. The security of Russia’s Near Abroad remains fragile, threatening the physical developments of the New Silk Road, while enhancing its strategic importance. At the Asian end of the Road, Afghanistan remains a security challenge. The session will look at security of the East-West corridor, its implications for the EU and US, and the European security at large. In a nutshell the key question is what is the mix of policies that can get the West and Russia out of the less than zero sum game where all sides incur short and long term costs?

19:30 – 21:00 National Interest in a Shifting Context: Romania – a Stable Partner in a Troubled Region (off the record, closed to press – by invitation only)

09:45 – 11:30 New World Order after Ukrainian Crisis, 25 Years After the Fall of the Berlin Wall (on the record, open to press)
25 years ago Eastern Europe has emerged from the total paralysis of totalitarian thinking and entered the difficult path to political, economic and social reforms. A quarter of century later not only CEE but the entire Mediterranean space and Eastern Europe at large have been confronted with popular movements, revolutions, clashes of vision regarding the institutional, political and sometimes even economic model for the countries and sometimes for the region that connects Europe and Asia as well as the Greater Middle East. The panel will explore what to expect from the next decades in terms of governance, economic and civic reforms that converge into the political future of the region and will be reflected along the NSR.

50 by 2050 Global Women’s Leadership Initiative – The Romanian Chapter (on the record, open to press)
Striving to inspire a new generation of women leaders to realize the goal of at least 50 percent women in positions of political, public, business and civic leadership by 2050. The initiative focuses on a vital momentum to the next generation of women leaders who will invest in their countries and communities, provide leadership for their governments and societies, and help change the way global solutions are developed.

Agropolis – Romania’s New Agriculture Strategy (on the record, open to press)
Romania has the potential to become one of the most important players in the agricultural field both in EU and in the greater Black Sea region. With the new National Strategy on Agriculture, the Romanian Government will focus on creating a legal framework for developing an added value products system that will boost the agriculture sector in Romania, allowing us to become an important exporter on the New Silk Road.

13:15 – 14:30 Powerful Regional Players Shaping the New Silk Road (on the record, open to press)
Pivot to Asia India, Japan, South Korea and Iran have each and all the potential and strategic reason to influence the NSR, as they could each and all benefit from it. The panel will look at the geopolitical constraints and opportunities that shape these countries’ interest in the New Silk Road, their relation to the main actors along and shaping the NSR and their economic contribution to and benefits from development of NSR.