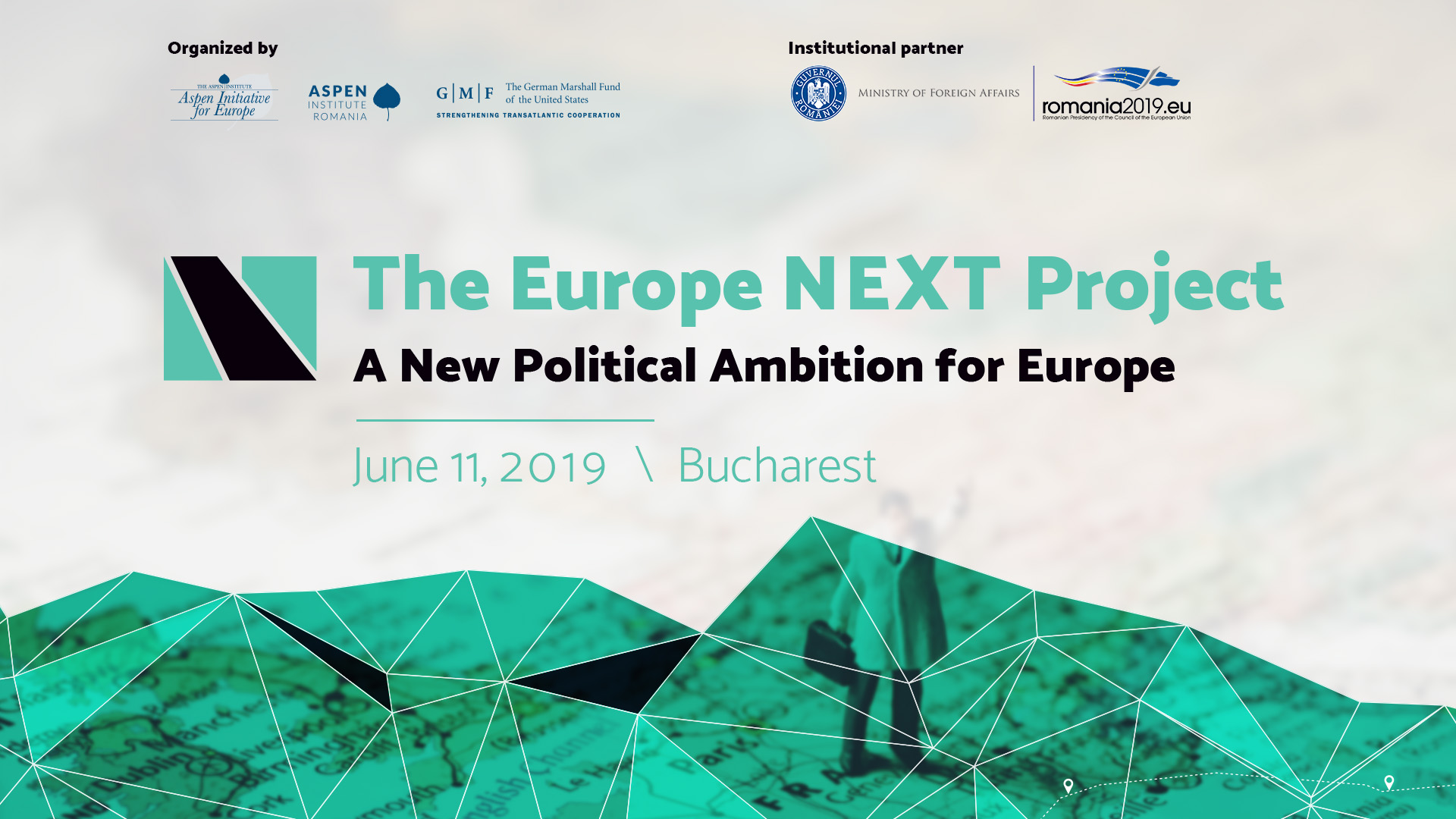 The Europe NEXT Project – A New Political Ambition for Europe

The Aspen Institute Romania, on behalf of the Aspen Initiative for Europe (AIfE), together with the Ministry of Foreign Affairs of Romania and the German Marshall Fund of the United States, Bucharest Office, organized the conference The Europe NEXT Project. A new political ambition for Europe. The event was held in Bucharest on the 11th of June 2019, under the auspices of the Romanian Presidency of the Council of the European Union, at the Ministry of Foreign Affairs of Romania.

The Europe NEXT Project envisages a 3 years endeavor, with a series of conferences and policy papers in each of the countries holding the rotating Presidency of the Council of the European Union and the Aspen Institutes host countries. The official project launch took place through the conference Cores and Peripheries in Europe?, held on December 4-5 in Brussels, at the Permanent Representation of Romania to the European Union and benefited from the outstanding participation of high-level officials.

The Europe NEXT Project is designed to bring forth fresh arguments in support of a united and cohesive Europe. It aims to deliver an impetus for a new stage in the European Union’s journey, with a renewed emphasis on respecting and reflecting the different views, interests, and ambitions of the member states, as well as those of the potential new members.

To further pursue its mission, the third conference of the project is set for November 2019, in Brussels.

Doru Frantescu – Elections2019 what impact on the EU

Cohesion has been one of the primary goals of the European Community and it still remains one of its top priorities. For its further progress and indeed survival the European Union has to put forward a comprehensive plan to deliver shared prosperity to its citizens and regions. How are the results of the elections to the European Parliament affecting the European cohesion? How can member states deal with the current economic challenges and disparities? What will maintain the unity of the European Union against the background of divergent political stances at national level? Is the EU going to function differently after Brexit and the coming European elections? What are the main arguments in defence of a united Europe?

The world is undergoing geopolitical and societal changes, driven by both the “great power politics” and technological developments.  To remain relevant, and even powerful, in the changing world, the EU needs to more coherently and resolutely overcome challenges and use opportunities, while adapting to new international dynamics, both economically, politically and militarily. Creating Europe’s profile as a leader in the digital world could provide answers to many European questions.

The European Union has always faced critique from the point of view of its the democratic deficit. However, never before have so many external and internal threats challenged the trust citizens have in the European project. Disinformation from outside and inside the EU is considerable. An Action Plan was recently put forward by the European Commission and High Representative to counter such threats to democratic processes. Poor delivery on the elements of the social contract and the growing disparities make citizens feel dettached from the decision-making process. What are the best ways to develop  the EU`s social dimension, and the enforcement of the European Pillar of Social Rights? How can the European project be better formulated and communicated to all its citizens? How can European politics get closer to citizens? What is the impact of the recent elections?

Impact of the European Elections, study by VoteWatch Europe

The Future of Central-Eastern Europe – a regional approach, study by Legatum Institute