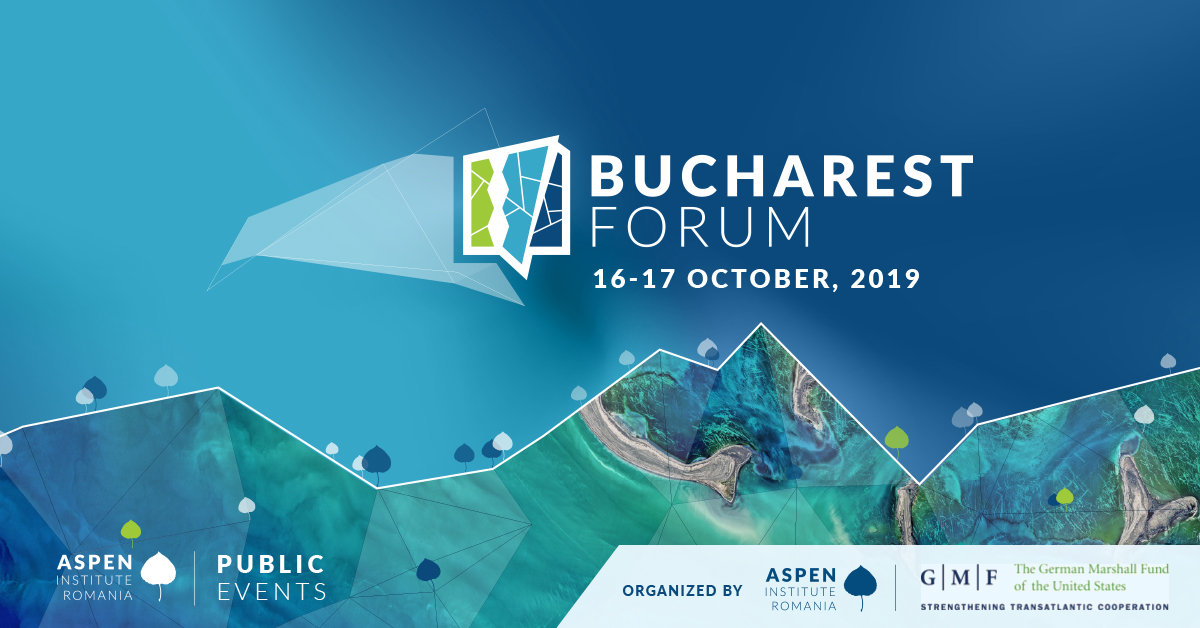 Bucharest Forum is an annual high-level event organized by the Aspen Institute Romania and the German Marshall Fund of the US, Bucharest office. Since its inception in 2012, the mission of the Bucharest Forum is to create a regional platform for forward thinking on economic and security policies, and for promoting political dialogue between governments and civil society.

In 1989 the trans-Atlantic space seemed to have come to a stable and tranquil state that would forever ensure peace and prosperity not only on the two sides of the Atlantic, but to those parts of the world willing to embrace and abide by the same values. Thirty years later the world is marred by geopolitical disruptions, economic volatility and social anguish, with questioning the very values they cheered three decades ago. Trans-Atlantic cooperation is weakened by a return of great power politics, the US is reframing its attitude towards the world and within itself, while Europe seems captive to its own angst and low self-esteem.

Technological advances are both embraced and feared by businesses, politicians and citizenry, and the wide opportunities they open lead to scenarios ranging from heavenly to apocalyptic. Trans-Atlantic space seems more unsettling and the future more unpredictable than ever in the last decades. Against this background, China continues to rise economically, and Russia seems to intimidate the European neighborhood, opposing their streamlined decision making and tight control of society to the seemingly less efficient democratic system and respect for human rights, only to further threaten democratic self-esteem and deepen polarization within societies. Nowadays East meets West not only geographically, and not only in the East of Europe.

Thus, there are three silver linings this edition of Bucharest Forum aims to explore:

Bucharest Forum 2019 will offer a platform for reflection on the challenges of the present, and on possible paths for the future, as seen from the Eastern border of the Western world.

14:35 – 15:45 Emerging Europe @30 – a Fresh Perspective
For 30 years, countries to the East of Berlin have been both struggling with old approaches and behavior and striving on new segments of modern economy. Embracing various and, at times, antagonistic discourses, political class is looking either to the East, to the West or at times at both, proposing societal constructions and economic models accordingly. While recent history continues to influence the region, it emerges as a region with potential, ideas and, possibly, solutions.
• Dan Neculaescu, State Secretary, Ministry of Foreign Affairs
• Matthew Boyse, Deputy Assistant Secretary, Bureau of European and Eurasian Affairs, US Department of State
• Rastislav Kacer, Chairman, Globsec
Moderator: Alexandra Martin, Strategic Forums Director, Globsec

16:00 – 16:30 Conversation with Octavian Ursu, Mayor of the City of Görlitz, Germany and Cosmin Prelipceanu, Journalist, Digi24
The conversation will be held in Romanian and simultaneous translation in English will be available

16:30 – 17:30 Emerging Europe @30 – A New Economic Model?
This year, Central and Eastern European states are celebrating 30 years since they begun their transition from centrally planned economy to market economy. Currently, these states are experiencing different levels of economic development, due to differences in productivity and connectivity. However, one challenge all these economies will likely have to overcome in the near future is escaping the middle-income trap, as countries which have achieved significant growth thanks to their EU membership may begin to stagnate due to rising wages and labour costs. This panel discusses possible solutions to this problem, including a paradigm shift to a new economic model based on investments in education, innovation and on strengthening institutions.
• Steven van Groningen, President and CEO, Raiffeisen Bank Romania, Member of the Board, Aspen Institute Romania
• Daniela Iliescu, CEO, Patria Bank
• Mark Davis, Regional Director for Romania and Bulgaria, European Bank for Reconstruction and Development
• Clara Volintiru, Associate Professor, Bucharest University of Economic Studies (ASE), Aspen Alumna
• Rogier van den Brink, Lead Economist, World Bank
Moderator: Andrew Wrobel, Founding Partner, Strategy & Content, Emerging Europe

13:15 – 14:15 Parallel sessions: International Governance in the Age of Economic and Military Conflicts

Sala Eroilor / Heroes’ Hall
Trade Wars, Conflicts and Global Governance
The economic clout has had trade as its main fuel for ever. Conflicting trends are vying for keeping the mechanisms ruling the overall environment of trade and development, or for changing them, as globalization seems to be coming of age and enter a new era. The so-called ‘multipolarity’ is a receipt for more global cohesion – or a disguise for reverting to One Way to Rule Them All.
• Shinichi Nakabayashi, Director for Japan, Board of the EBRD
• Kerry Brown, Director of the Lau China Institute, King’s College London
• Jin Canrong, Associate Dean of School of International Studies, Renmin University of China
Moderator: Terry Martin, Senior News Anchor, Deutsche Welle TV

Sala de Marmură / Marble Hall
Energy Today: between Conventional and Sustainable?
Energy today is at a crossroads, both on the world stage and regionally, with decision-makers and industry facing a choice between continuing to rely on fossil fuels and integrating newer, cleaner sources of energy. While there are different approaches among world powers, the future will no doubt start bringing a new energy mix. The panel will explore how changes brought by the new geo-economic, financial and technological context can bring sustainability and efficiency to future energy systems as well as energy security.
• Mehmet Ogutcu, Founder & CEO, Global Resources Partnership
• Corina Popescu, Chief Executive Officer, Electrica
• Alessio Menegazzo, Head of Sustainability and Institutional Affairs – Enel Romania
Moderator: Cristian Pirvulescu, General Manager & Founding Partner, Enevo Group

15:00 – 16:00 Transatlantic and Eurasian Security at Crossroads
Security of the Transatlantic space is currently facing new challenges, out of the traditional military ones. Cyber threats, informational wars, and many hybrid actions of both state and non-state actors are complicating the security landscape and create, or expose, new vulnerabilities, Tensions within the transatlantic space are adding to the complexity, as do imminent major political events (Brexit, US elections, among first). An ever-warming relation between Russia and China may well be extended beyond the current economic dimension, creating an even more complex security context.
• Bobo Lo, Russia Research Fellow, French Institute for International Affairs
• Ömer Önhon, Director General for International Security Affairs, Ministry of Foreign Affairs of Turkey
• Ely Karmon, Senior Research Scholar, International Institute for Counter-Terrorism, Herzlyia
• Radu Tudor, Political and Defense Analyst
Moderator: Alina Inayeh, Director, German Marshall Fund of the United States, Bucharest office

16:00 – 17:00 Old and Modern Geopolitics for the Greater Black Sea Area – Caspian, Black Sea, Mediterranean
Geopolitical competition for areas around seas has always been present as societies developed. After a few decades of shared goals and ideological harmony, major power politics returned, and the Black Sea area has become, yet again, a geopolitical competition field. In the era of globalization and trans-national threats, vulnerabilities and opportunities, what happens in the Black Sea does not stay in the Black Sea anymore, but influences, and is influenced, by events in proximity. A look at the enlarged geopolitical and geo-economics context is suitable to better identify trends and developments.
• Alexander Iskandaryan, Director, Caucasus Institute
• Arsen Kharatyan, Former Advisor on Foreign Relations to the Prime Minister of Armenia
• Vasil Sikharulidze, Chairman, Atlantic Council of Georgia
• Hanna Shelest, Editor-in-Chief, Ukraine Analytica
Moderator: Tim Judah, Balkans Correspondent, The Economist

Dr. Jin Canrong is a State-honored “Chang Jiang Scholar” professor and a Distinguished University professor, He is the Associate Dean with the School of

Claire Casey is Global Managing Director of the Economist Intelligence Unit’s Public Policy Practice. There she manages teams on three continents, generating evidence-based insights to inform internal strategy and external engagement for governments, international institutions, corporations, foundations, and NGOs around the world. The practice specializes in research and analysis of current and prospective market, policy, […]

Koert Debeuf (1974, MA Ancient History) is a geopolitical analyst, columnist and writer. He is Interim Editor in Chief of the EUobserver, Visiting Research Fellow at Oxford’s Centre for the Resolution of Intractable Conflict and Associate Researcher of the Institute for European Studies at the Brussels University VUB. From 2016 to 2019 he was European […]

Ambassador Sorin Dumitru Ducaru has been recently selected as the Director of the European Union Satellite Centre (SatCen), by the SatCen board represented by the 28 EU member states and subsequently appointed by Federica Mogherini, the High Representative of the Union for Foreign Affairs and Security Policy / Vice-President of the Commission for this position. […]

Daniela Iliescu is the CEO of Patria Bank and Board Member in Patria Bank and Patria Credit, with extensive experience in the financial sector (financial management, reporting and budgeting) within major institutions such as the EEAF (Emerging Europe Accession Fund and BAF (Balkan Accession Fund). Daniela was actively involved in monitoring equity fund investments in the […]