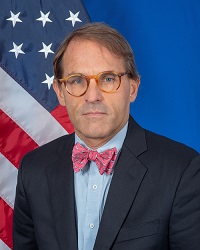 A career member of the Senior Foreign Service, Matt Boyse serves as Deputy Assistant Secretary overseeing policy towards Poland, the Czech Republic, Slovakia, Hungary, Romania, Bulgaria, Slovenia, Austria, Switzerland, and Liechtenstein.  He also oversees the Office of the Special Envoy for Holocaust Issues.  Mr. Boyse joined the Bureau of European and Eurasian Affairs in September 2018 after serving as Acting Deputy Chief of Mission and Minister Counselor for Political Affairs in Ottawa from 2015 until 2018.

Mr. Boyse has had three assignments in Germany – as Political Advisor to the Commanding General, U.S. Army Europe, U.S. Consul General in Duesseldorf, and at Embassy Berlin. He has served in political or economic positions in Kabul; New Delhi; Warsaw; Moscow; and Dhaka; and as a consular officer during his first tour in London.  In Washington, he was Deputy Director (Political) in the Office of European Union and Regional Affairs and Executive Assistant to the Assistant Secretary for Economic and Business Affairs.  Before joining the Foreign Service, Matt worked at Radio Free Europe/Radio Liberty and Stiftung Wissenschaft und Politik, both in Germany.

Mr. Boyse has a B.A. in Classics (Latin and Greek) from Haverford and an M.A. (Soviet and East European Affairs) from Columbia.  He speaks German, Polish, and Russian.