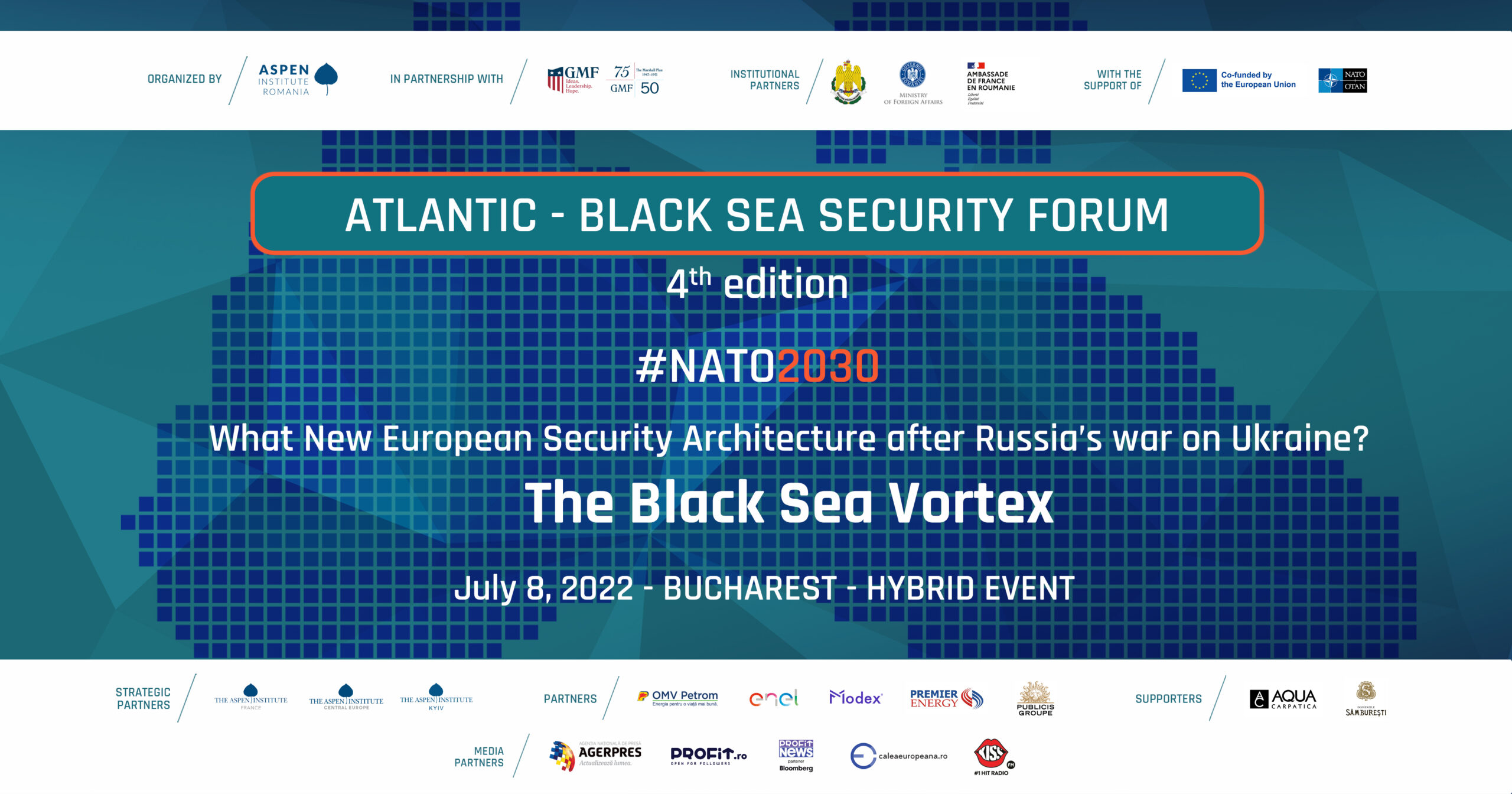 The Aspen Institute Romania together with the Bucharest Office of the German Marshall Fund of the United States, and in partnership with the Ministry of Foreign Affairs, the Ministry of National Defence of Romania, the Embassy of France in Romania, with the support of the European Commission and NATO Public Diplomacy Division, will organize the 4th edition of the Atlantic – Black Sea Security Forum on July 8, 2022, in Bucharest.

The Atlantic – Black Sea Security Forum is a high-level international event dealing with most ardent topics on the international security agenda. In addition, given the current geo-political context, the 2022 edition will also include an Aspen Energy Summit Panel session.

With the atrocious war on Ukraine by the Russian Federation, the European and regional security have been shattered. The world as we knew it has dramatically changed, in both its security and economic dimensions. We are still to grasp the full implications of these changes, and yet we need to adapt while we learn. The West has shown great unity and resolve in facing a common threat, but the broader regional, European and global implications of this brutal shock are still to be defined, and new challenges to both the unity and the resolve of the West may still be on the horizon.

In Ukraine, with Russia’s occupation of the land corridor connecting Crimea to the Donbass and the de facto blockade of the Sea of Azov and of Ukraine’s access to the Black Sea ports, the region has become the epicenter of a dynamic new balance of power between NATO, the EU and Russia. This Black Sea Vortex of strategic, political, economic and competition of values will define the very character of the New Trans-Atlantic Security Architecture.

The Atlantic – Black Sea Security Forum will also coincide with two defining moments for the Black Sea region and Romania: the intermediate operational capability of the new NATO Battle Group in Romania, with France as the framework nation, and 25 years since the launch of the Strategic Partnership between the United States and Romania in July 1997.

With Finland and Sweden on the way to becoming new members of NATO and a few days after the historic NATO Summit in Madrid, the Forum will address the implications of the new NATO Strategic Concept, the new deterrence and defence posture on the Eastern flank agreed by Leaders, and the future of the NATO – EU Strategic Partnership. Energy security, the reconstruction of Ukraine and the European perspectives of Ukraine, Georgia and the Republic of Moldova, food security, freedom of navigation, new technologies, cyber and fighting disinformation will figure prominently on the agenda. The Forum will continue addressing the topical subject of societal resilience at both national and sub-national levels.

Russia has instrumentalized energy as a potent foreign policy weapon, profiting from the dependence of key European economies on Russian natural gas. The war in Ukraine coupled with insufficient supply from other sources have led to a severe price hike affecting European consumers. Already before the war, a key priority of the European Union was the Green Transition, aiming to become carbon neutral by 2050. The current crisis has provided the impetus for accelerating this transition and the use of renewable energy (including nuclear) that has the additional benefit of being decoupled from geopolitical tensions. In particular, the EU has launched REPowerEU, a plan to rapidly reduce dependence on Russian fossil fuels and fast forward the green transition. Thus, the conditions are there for transitioning to a sustainable economic model while getting rid of an important geopolitical weakness of Europe. The panel will discuss how this transition can take place, while also analyzing possible short-term measures addressing the current energy crisis. The role of natural gas as a transition fuel and the exploitation of Black Sea resources will also be addressed.

It is yet unclear how and if the war in Ukraine will be settled in the near future. Despite Russia’s initial failure in capturing Kyiv and toppling the Ukrainian government, the Russian army has managed to secure a land corridor between occupied Crimea, Donbas and southern Russia, albeit with very high military, political and economic costs. This panel will discuss all possible options for the future, such as a negotiated settlement, a frozen conflict and the annexation of conquered territory to the Russian Federation or a further escalation of the conflict. Panellists will also look at the future of relations between Russia and the West and implications for transatlantic security.

14.20 – 15.00 EEST Panel 3 Democratic Resilience and a New Economic and Social Contract – in partnership with the Aspen Institute France

The panel will discuss ways to advance the development of a comprehensive and dynamic yet operational approach to resilience, including with a view to implementing forward resilience – projecting resilience forward and supplementing traditional notions of territorial security with actions to address flow security – protecting critical links that bind societies to one another. It will also seek to incentivize discussions on optimal ways of pursuing an enhanced Euro-Atlantic resilience agenda, including by exploring necessary synergies between relevant institutions and societal stakeholders. How can our societies operationalize the mutually reinforcing instruments of democratic, societal and collective resilience and how can we agree on a new social contract protecting our values? The panel will further address will address online disinformation and fake news and the pressure these tactics place on institutions and on individuals. Undertaken sometimes as part of fully-fledged influence campaigns, these tools aim at eroding trust in institutions such as NATO, the EU, and the governments of their member states and partner countries. What are the best strategies to counter this?

Already before the invasion of Ukraine, constant cyber-attacks, often carried out on behalf of state actors and directing at damaging and disrupting the information systems of liberal democracies, had led to a paradigm shift in the security and defense field. NATO Allies have endorsed a Cyber Defence Pledge and are further boosting their national cyber defences based on the commitments made. Thus, strengthening cyber resilience is increasingly becoming a priority across the transatlantic space. The panel will debate possible strategies for this as well as cooperation in the cyberspace, looking at perspectives for NATO, transatlantic Relations and Romania. Furthermore, the panel will discuss the key role of solutions coming from the private sector in promoting stability and reducing risks in the cyberspace.

16.00 – 16.50 EEST Panel 5 The Transformation of Trans-Atlantic Security following the NATO Strategic Concept and the Strategic Compass of the EU

Russia’s invasion of Ukraine has strengthened transatlantic cooperation and led to the unanimous conclusion that the security of NATO member states needs to be boosted. To counter new challenges and adapt to the new geopolitical realities, NATO is releasing at the Madrid Summit its Strategic Concept for the next decade, aiming to reflect and respond to current developments and integrate the lessons that the Alliance has learned over the past months. How does the concept reflect the region, its vulnerabilities and needs and how does it reflect the increased political role NATO has assumed to play? At the same time, as a powerful economic actor and a driver of democratization, the EU may and should have a more prominent stature in its neighbourhood, and is seeking a more prominent role in addressing its security needs. The Union has launched its Strategic Compass, aiming to assess its strategic environment, the threats and challenges it is facing and their implications. How will this and other new tools help the EU bring greater coherence in the security and defense fields and develop a common European answer to the threats on its borders?

As the war has severely crippled the Ukrainian economy, it is becoming increasingly clear that the reconstruction will require a massive financial effort. Western political and financial institutions must be involved in the process of aiding the reconstruction with both financial assistance and know-how, in order to create provide the framework for stability and prosperity. Where will this money come from? What is the role of Romania and countries in the region in the reconstruction of Ukraine?

18.30 – Cocktail Reception dedicated to the 25th Anniversary of the Strategic Partnership between the United States and Romania

H.E. Ms Auer has served as the French Ambassador to Romania since 2020. A career diplomat with experience in the European Commission, she specializes in EU affairs. She acted as an advisor to several ministers, as well as the deputy spokesperson for President Jacques Chirac. More recently, she served as French Ambassador to North Macedonia, […]

Jean-Christophe Bas is the Founder and CEO of The Global Compass www.theglobalcompass.net . The Global Compass provides expertise and assistance to Governments , Inter Governmental  Organizations, public entities and corporate sector to promote pluralism, inclusive society, intercultural dialogue, education for democratic citizenship and participation. He is also the Founder and CEO of Connecters for Peace […]

As Deputy Director, Mr. Bertók provides strategic leadership to advance the public governance agenda at the OECD and multilateral fora. Prior to this, he was heading divisions for integrity and for public sector reform, supporting policy makers with comparative data, good practices, policy guidelines and practical tools for building a culture of openness and integrity, […]

Yordan Bozhilov was born on 27 November 1969 in Sofia. After graduating from university and completing compulsory military service, Mr Bozhilov began work as an expert at the Ministry of Defence in 1992. He successively occupied various positions in several MoD structures, to include chief expert, head of department within the Administrative and Information Services […]

Senator Cadic serves as vice-president for the French Senate’s permanent committee overseeing foreign affairs and defense issues. In this capacity, he has participated in over 400 parliamentary missions, covering 100 countries. He is also a vice-president of the France-Romania inter-parliamentary Friendship group. A successful entrepreneur in the IT sector, he started his political career as […]

Cristina Cileacu is a veteran TV producer and reporter, with over 20 years of field experience. She worked for major Romanian national TV stations and contributed to international media outlets. For the last 10 years she produces and hosts her own program at Digi 24, “Diplomatic Passport”, that introduces Romanian viewers to key global issues […]