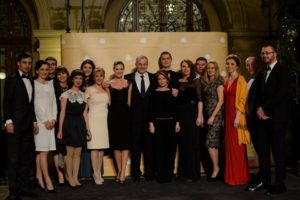 The 2013 edition of the “Aspen Leadership Awards and Gala Dinner”, on December 9 at the Palace of the National Bank of Romania, celebrates our achievements in the past 7 years and offers a perspective on our future leadership, policy and public programs.

The Aspen Leadership Gala stands as an occasion for those that were instrumental in our creation and successes and those that benefited of our programs and fellowships, to once again come together and reflect on what is the added value of a community moved by shared values and not just interests. The Gala honors the Young Leaders Program 2013 generation for its accomplishments in the past year in the ambitious attempt of producing a significant impact on societies across Central and Eastern Europe.

Also, continuing the Aspen tradition, through the Aspen Leadership Awards we acknowledged specific efforts and personal commitment to values-based, creative and transformative leadership of people that have had a significant contribution to the overall advancement of Romanian society, as follows:

Craig Kennedy has been President of the GMF since 1995. Under Mr. Kennedy’s leadership, GMF has grown from a small grant-making organization to what GMF is today, a global think tank focused on bridging U.S.–European differences on foreign policy, economics, immigration, and the environment. He has also expanded GMF’s programs in Central and Eastern Europe and the Balkans. Two major accomplishments have been the launch in 2003 of the Balkan Trust for Democracy and the Black Sea Trust for Democracy in 2007. He has provided GMF with a strong infrastructure throughout Europe, opening new offices in Paris, Bratislava, Brussels, Belgrade, Ankara, Bucharest and Tunis. Another key program, the Transatlantic Fellows program, was begun under his direction and provides outstanding policy analysts, journalists, and academics an opportunity to pursue their research and writing interests in one of GMF’s offices. He has also supported several substantial new projects such as Transatlantic Trends, an annual survey of American and European public opinion, and the Transatlantic Academy, a research institution for academics to jointly pursue a transatlantic issue each year.

Mr. Kennedy serves on the Board of Refugees International, The US-Russia Foundation, True North Venture Partners, First Solar and as an independent trustee of Invesco Van Kampen Closed-end Funds. He is also a member of the Alfred Herrhausen Society Board of Trustees.

2LT Larisa M. Tudor assumed duty as a Signal Corps platoon leader in the Romanian Land Forces in June 2013. She is currently attending the Basic Officer Course at „Decebal” Training Center in Sibiu. While at the Romanian Land Forces Academy, 2LT Tudor was nominated and admitted to the US Military Academy West Point on June 2009. In the summer of 2011, she was assigned as a Squad Leader during the Academy’s Cadet Field Training. During this time, she fulfilled various leadership positions such as Squad Leader, Battalion Assistant S3 Operation Officer, Platoon Leader and Regimental Assistant S1/Personnel. During her senior year at the Academy, she was elected as a team captain for the female Judo team. Her academic achievements include participating in the “Richard Tapia” Celebration of Diversity in Computing Conference and assisting in the development of a data visualization tool which was awarded as the runner-up for West Point’s Electrical Engineering and Computer Science (EECS) department’s Projects Day competition.

In addition to her cadet duties, 2LT Larisa Tudor was an active member of the International Cadet Council, assisted with the Special Olympics and International Day celebrations. Her noticeable achievement during her Judo career was placing first at the U.S. Collegiate Nationals. 2LT Larisa M. Tudor graduated from the US Military Academy with a BA in Computer Science (with honors) in May 2013 and was commissioned as a Signal Corps Officer in the Romanian Army in June 2013.

The 2013 “George Pomutz Service with Dignity” Leadership Award is presented by the Mr. and Ms. Vasile Iuga

Ana Maria Brânză was born on November 26, 1984. She began fencing at age 10 and obtained in 2007 a master of sports science from the Faculty of sports and physical education of the University of Craiova. The same year she was awarded the title of Master Emeritus in Sports. She won her first national championship at age 15 and went on to win the Romanian National Championships a total of 8 times. Her medal record includes 1 Olympic silver medal, 2 gold team medals and 3 bronze team medals at the World Championships, 4 gold team medals and one gold individual medal, as well as one individual silver, 2 team silvers and 1 individual bronze at the European championships, as well as several medals in military sporting events. After taking the silver medal in the 2008 Summer Olympics in Beijing, she was awarded the Romanian order for sports merit (Ordinul “Meritul Sportiv”), second class. She finished first in the overall women’s épée World Cup for two consecutive seasons, 2007–2008 and 2008–2009 and also in 2012-2013.

She was designated a member of the athletes commission of the International Fencing Federation (FIE) by its executive committee for the period 2009–2013 and in 2013 she was elected to that position for another term. In 2013 Brânză made the podium in six out of eight entries in World Cup events, including gold medals in the Challenge International de Saint-Maur and the Havana Grand Prix.

Ionut Budişteanu is a 19-year-old student at Oltchim School Group, the winner of a stunning 90 national and international prizes and the designer of more than 50 information technology projects. In this year’s edition of the International Science and Engineering Fair, the world’s largest high school science research competition, organized by Intel Company in Arizona, the Romanian scientist’s won the Top Prize for designing a low cost, autonomously controlled car. During the competition, he also won the top spot by category, alongside with the Best of Category and another two special prizes from the companies sponsoring the awards. The winning prototype presented by Ionut can be considered a further step into leading the way to the future of transportation, because it signals the potential of manufacturing autonomous driving vehicles to the masses. Ionut used artificial intelligence technology and a mounted camera on the car to identify traffic lanes, curbs, cars and even people. The project is equally innovative in terms of costs, because the version used by Ionut for experiment and unveiled at Intel ISEF costs only $4,000 to build, as opposed to Google’s $75,000 self-driving car.

Actually, Ionut Budişteanu participated in the Intel ISEF competition for the third time, last year introducing a project that was aiming to use tongue sensors for creating images, in order to support visually impaired persons. With this year’s accomplishment, he became the first Romanian to win the Intel International Science and Engineering Fair and was included by Time magazine among the 16 most influential teens of the world this year.

The 2013 “Innovation and Technology” Leadership Award is presented by ExxonMobil Romania.

The Forum was intended to highlight Constanta’s potential of turning into an engine of growth on Romania’s Eastern flank.

This Report highlights the main lines of activities, in accordance with the Strategic Goals and the Plan of Activities approved at the November 2016 Board and General Assembly.