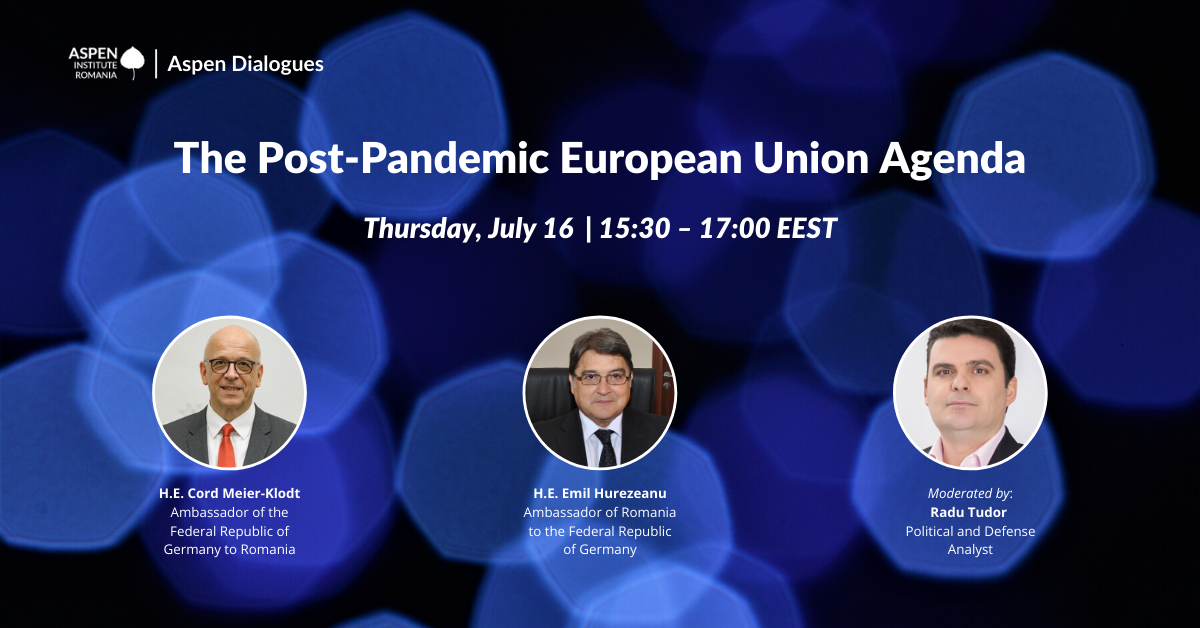 Aspen Institute Romania is organizing a webinar on The Post-Pandemic European Union Agenda, on Thursday July 16, between 15:30 – 17:00 EEST. The webinar is held under the aegis of the Aspen Dialogues format and will focus on the priorities of the upcoming German Presidency from the perspective of Europe’s economic recovery, while looking at potential measures that could strengthen the Union’s political will.

The upcoming German Presidency of the Council of the European Union comes at a critical time for the EU, as the pandemic and the ensuing health and economic crisis could potentially spillover and exacerbate existing political tensions. Therefore, consensus-building at the EU level will become a bigger challenge than it already is, requiring a carefully concerted effort coordinated by the Presidency. The webinar will look at both short-term and long-term potential measures for boosting European competitiveness and economic growth. Furthermore, discussions will also focus on Romania’s approach in drafting a post-pandemic European agenda, looking at the country’s priorities and at ways in which its objectives could be achieved within the post pandemic realities.

As the EU’s economic powerhouse, how does Germany and its upcoming Presidency envision the post-pandemic Union, in terms of opportunities for growth after an inevitable downturn? How will EU states be able to finance much needed measures for recovery and how does the pandemic affect the EU 2021 – 2027 Multiannual Financial Framework?

The discussion will be followed by a Q&A session based on questions received from the participants.

Speaker
Ambassador of Romania to the Federal Republic of Germany

Emil Hurezeanu (born 1955) is a Romanian print, radio and tv journalist with a strong domestic and international professional and public profile. He worked as a Senior Editor and lately as the Director of the Romanian Department of  Radio Free Europe, in Munich (1983-1995), led the Romanian Section of Radio Deutsche Welle in Cologne (1995-2002), […]

Speaker
Ambassador of the Federal Republic of Germany to Romania

Cord Meier-Klodt was born in 1958 in Hamburg. Between 1978 and 1984, he studied Roman Languages, Philosophy and Pedagogies in Grenoble, Hamburg and Paris. He joined the German Foreign Service in 1985. Between 1987 and 1990 he served as First Secretary of Consular and Legal Affairs of the German Embassy in Accra. The following two […]

Born on July 24, 1970. 30 years experience in media as tv host and anchor, columnist and radio collaborator. Covering NATO Summits since 1994, moderator and invitee to several events on institutions, forums and NGO’s for defence, security, intelligence and foreign affairs : NATO, SHAPE, Aspen Institute, German Marshal Fund and others. Radu Tudor is […]