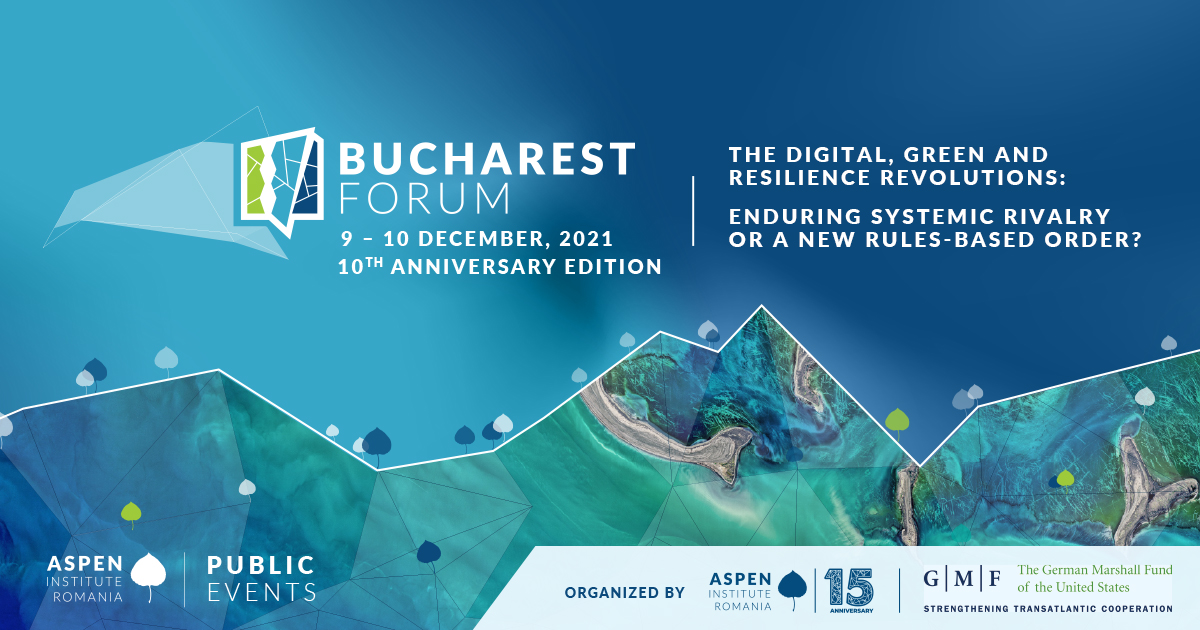 The 10th edition of the Bucharest Forum will be held on December 9 – 10, 2021, in a hybrid format, with participation possible both in person and online.

Bucharest Forum is an annual high-level event organized by Aspen Institute Romania and the German Marshall Fund of the US, Bucharest office. Launched in 2012, the mission of the Bucharest Forum is to create a multi-regional platform for innovative, forward-looking thinking on economic and security policies, and for promoting an action-oriented dialogue between governments, private sector and civil society.

While geo-economic politics has always been about power and who has it, never before in the last decades has this been at the backbone of international relations and development. Events of the recent years deepened the rifts between West and East, as well as within these, and the need and fight for power became the main rationale of actions and decisions. Technological developments, natural disasters as well as societal transformations tend to be exploited and analyzed in this key, drawing a picture of continuous confrontation at times with uncertain outcomes.

Yet common threats and opportunities, from the SARS-COV-2 pandemic to technological breakthroughs, should push strategists and officials to look beyond the short term, and design strategies that look at enduring and long-lasting effects. Will these determine a new rules-based international order, as some hope for and predict, or will systemic rivalry endure, and remain the backbone of future developments? The race for power between continents, countries and within societies and even between individuals can either be the engine of common progress, should synergies be accounted for, or the rationale for continuous conflicts, at all levels and in different realms of life.

This edition of the Bucharest Forum invites to a deep and long-term look into the implications and effects of this power struggle in technology, security, economy and human and societal values. Experienced officials and reputable strategists will discuss current developments and future alternative strategies to advance, or at least contain threats to, progress and development.

In particular, the event will address the twin digital and green revolutions which will determine the winners and losers of the current geopolitical competition. Economic models around the world will have to cater to ambitious climate goals in order to remain competitive and sustainable, and only those states and societies able to adapt to this new paradigm will be successful and influential on the world stage. At the same time, the digital transition and technological innovations are reshaping industries and disrupting existing businesses and operating models. The future belongs to those able to integrate in their economic models new trends in the fields of automation, AI, data exchange and e-governance solutions. Bucharest Forum will debate long-term opportunities and challenges for policymakers, business leaders, and citizens alike in the context of the digital and green revolutions.

Another crucial topic will be resilience, which has become the new keyword of the post-pandemic world. The event will analyze methods of improving the resilience of democratic societies in the face of a variety of military and non-military shocks, such as hybrid attacks using cyber and disinformation as tactics, pandemics, and natural disasters. Cooperation between and within states and societies is critical in dealing with such a variety of threats more efficiently.

Over the course of the annual editions organized so far, Bucharest Forum reunited a variety of speakers, high-level officials, international experts and journalists, high ranking private sector representatives as well as members of the civil society and research and academia areas, from Romania and the region, but also from the EU member states, United States of America, Canada, Asia, Africa, fulfilling its mission of building a truly international platform of reflection and dialogue.