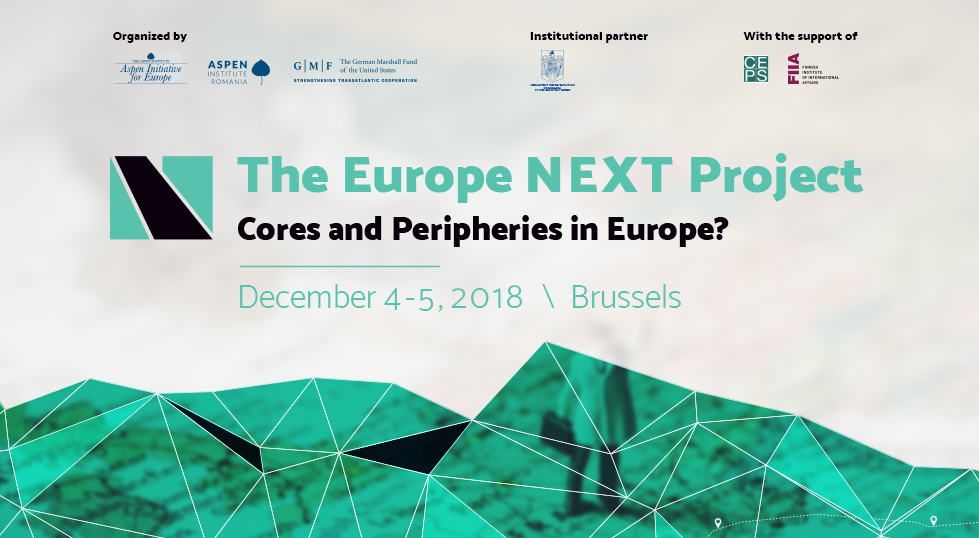 This is the first conference of a new Program, organized under the auspices of the Aspen Initiative for Europe, the network of the Aspen Institutes in Europe (France, Germany, Italy, Central Europe, Romania, Spain, and Ukraine). Its main aim is to respond to the mission and values of the Aspen family to defend and promote the European integration project, at a time of intense and multi-faceted internal and external pressures.
The goal of this event is to identify fresh arguments in defence of a united Europe and an impetus for a new stage in the European Union’s journey, with a renewed emphasis on respecting and reflecting the different views, interests, and ambitions of the 27 member states, as well as those of the potential new members.
The conclusions of our work will be presented to the political leaders and to the relevant national and European constituencies. As such, the conference series aims to provide new insights in preparation of the European Council in Sibiu, Romania and to the new political and institutional establishment emerging after the European elections and Brexit.

Institutional Partners:
Permanent Representation of Romania to the European Union

CHINA AND RUSSIA IN GLOBAL GOVERNANCE_FIIA

What drives wage gaps in Europe_ETUI

The political scene in the European Union is marked by tensions and challenges that arise both at EU level, as well as on the national scene. Over the past years, there is a marked rise of extremists or Eurosceptic parties in power and an increased tendency to look inward and reinforce a territorial approach when it comes to security matters. Geopolitical developments in the past 5 years have triggered a strong emphasis on military security of both the EU, member states and Northern America. What can and should member states do to further the European project? What is the role of national politics in the coming years? What is the role of the European institutions (e.g. EP, EC, Council) in the coming years? How can the EU develop a new constructive relationship with the UK? Is there hope for Human Security to make it to the main agenda?  Would it contribute to further European and Transatlantic cohesion? Are there steps that could be taken to push the approach forward?

16:45- 17:45 Competitiveness and the Single Market in the Era of the 4.0 Industrial Revolution

One of the main achievements of the European Union has been the Single Market. As it is now an intrinsic part of the economies of the member states, there is a different approach to managing global market uncertainties. Whether it is firm-level, sectoral, or economy wide competitiveness, there tends to be a significant overlap between national and European industrial strategies. To what extent are market regulations developed at the national or European level? How can member states best deal with the ongoing trade tensions? To what extent is the European Union equipped with the proper tools to prosper in the context of the 4.0. Industrial Revolution?

Aspen Dialogue – Public Opinion and the European Elections – A conversation with:

As the multilateral consensus is seemingly left aside in current day international affairs, rising bilateralism and regionalism gain ground instead. Form Trade Wars with the USA, to security provocations from Russia, the external positioning of the European Union seems more central to its internal survival than ever before. While focusing on enhanced partnerships with African countries, EU cannot nevertheless ignore the rising economic threat of China. To what extent can the European Union be a global actor in the current context? What are the areas in which Europe can lead by example? How can the rising tensions with both the USA and Russia be best addressed? Is there a unitary vision in the European Union concerning the new geopolitics?

Cohesion has been one of the primary goals of the European Community, and after subsequent multi-annual financial frameworks it still remains one of the top priorities. While many social and economic cleavages have been erased in the EU, new ones continue to appear, especially in the aftermath of the financial crisis. In the current context, in which the global markets are marked by growing uncertainty, ensuring the sources of capital for investments is one of the paramount conditions for achieving and sustaining economic growth and development. What are the main challenges brought about by the persistent European regional disparities? To what extent is the multilevel governance in the EU adequate in responding to the growing economic role of its cities and regions? Will EU structural funds continue to supply national needs and priorities, or will they become subservient tools to EU-wide strategies? Are the new EU investment tools a solution for Europe’s lagging regions?

12:30 – 13:45 The New Social Compact: Striking the Right Balance in Times of Polarization and Disruption

The European Commission argues that the Union is willing to stand up for its values and interests. But, there is still much debate across the EU with regards to the social contract that it actually does offers to its citizens. In times of increasing polarization and disruption, there is greater need than ever to put forward a social compact based on a common understanding of mutual rights and obligations. It is a fundamental element of the legitimacy of the European project. To what extent can we talk of a social contract with at EU level? What is the social compact that the EU can and should provide to its citizens nowadays? What are the main challenges in creating a common framework for a New Social Compact? How can we more fully involve and engage the new generations (Millenials and beyond) in a new vision for Europe?

Jean-Luc Allavena holds a Master’s degree from HEC Paris, France’s leading business school. He began his career at Banque Paribas before joining Lyonnaise des Eaux – now Engie. In 1992, he became the CFO of Techpack International (Pechiney). Jean-Luc Allavena became the COO in 1996, and the Chairman and CEO of Pechiney World Luxury Cosmetics […]

László Andor is Head of Department of Economic Policy at Corvinus University (Budapest) and Senior Fellow at the Foundation for European Progressive Studies (Brussels). He was EU Commissioner for Employment, Social Affairs and Inclusion (2010-14). Since 2015, he has been lecturing at Hertie School of Governance (Berlin), ULB (Brussels) and Sciences Po (Paris) and became […]

Christian Bodewig is the Program Manager for Southern Europe at the World Bank, based in Brussels. He oversees the Bank’s operational, advisory and analytical programs in the region, with a special focus on Greece, Cyprus, Italy and Portugal. Prior to his current assignment, he served as program leader for inclusive growth in the European Union […]

Doru Frantescu is CEO of VoteWatch Europe, a leading Brussels-based EU policy platform he cofounded in 2009.