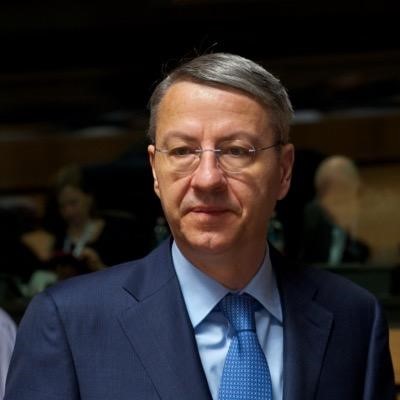 Ambassador George Ciamba is a career diplomat who has joined the Ministry of Foreign Affairs of Romania in December 1990.
From January 2017 until 13 November 2018, he served as Secretary of State for Bilateral and Strategic Affairs in the Euro-Atlantic Area, coordinating a wide range of subjects, from the strategic affairs – including NATO, US, disarmament and nonproliferation, cyber security and minority rights – to the bilateral relations with the EU Member States, candidate countries and regional cooperation formats.
In 2016, as a Special Representative for Economic Diplomacy, he contributed to promoting and developing economic projects of strategic interests to Romania, and to consolidating the inter-institutional relations for the country’s international representation in the economic field.
Since November 2012 he served as Secretary of State for European Affairs, promoting an active participation of Romania at all EU levels and the national contribution to the elaboration of EU policies. He coordinated the sectoral positions in all the configurations of the EU Council and participated in the General Affairs Council (GAC).
He represented Romania abroad as ambassador extraordinary and plenipotentiary to the Hellenic Republic (2005-2012) and to the Republic of Turkey (1999-2003) and as Permanent Representative of Romania to the Black Sea Economic Cooperation Organization (2001 – 2003). From July 2003 to January 2005 he served as Secretary of State for Multilateral and subsequently, Global Affairs in the MFA, coordinating dossiers related to the EU, NATO, the Council of Europe, the UN and other international organizations.
He speaks English and French fluently.