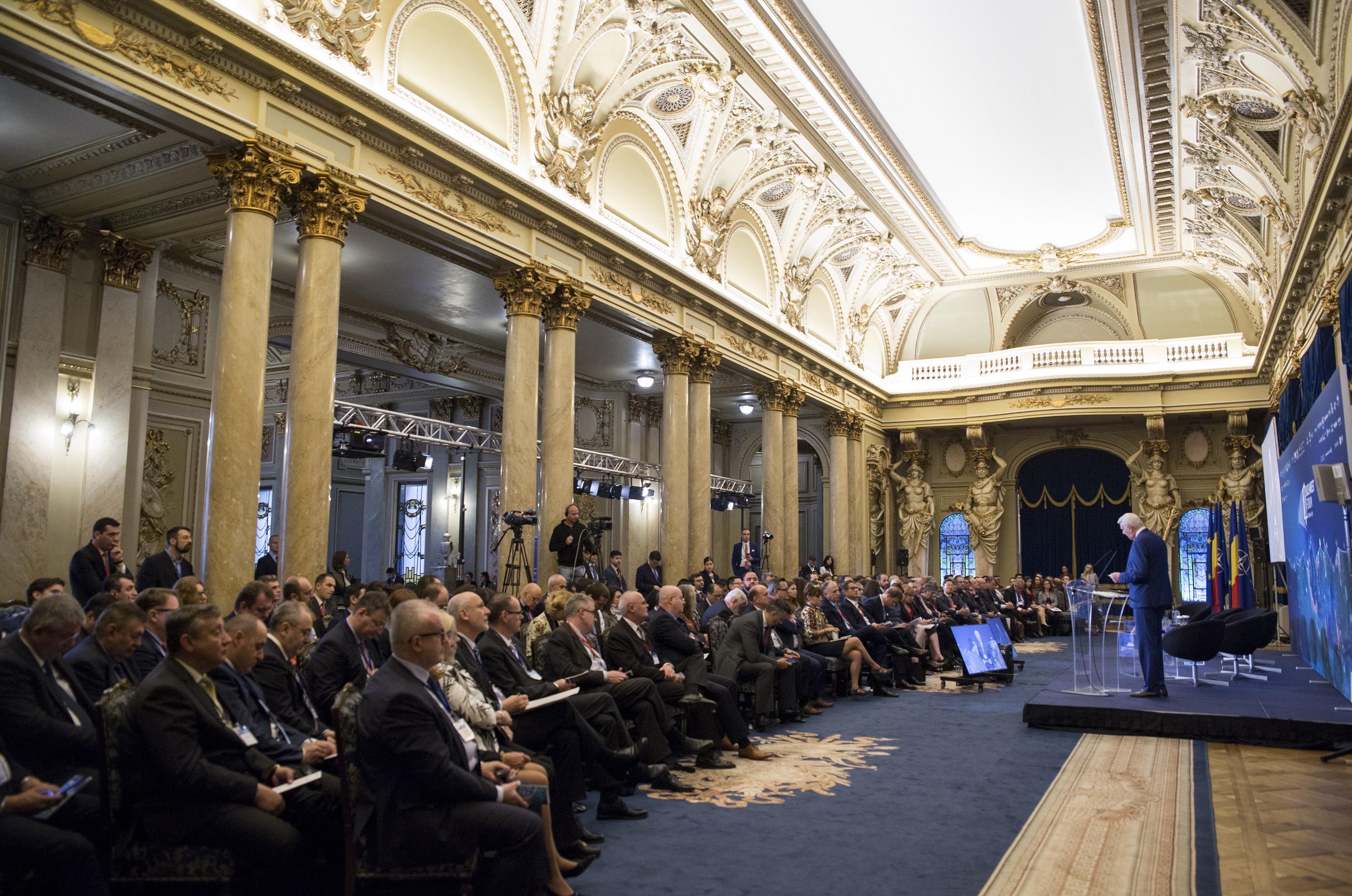 Jointly organized by the Aspen Institute Romania and GMFUS office in Romania, Bucharest Forum enjoys the key support of the Romanian Government, the Ministry of Foreign Affairs of Romania and the Ministry of National Defence of Romania. It benefits from a diverse participation of foreign and Romanian government representatives, political figures, experts, media and think tank representatives, as well as business leaders.

The sixth edition of the Bucharest Forum takes place between 4-6 October, 2017, at critical times for the region and Europe. The current international context is in flux, as on both shores of the Atlantic national politics is driven by new agendas and discourses, imprinting a consequent dynamics to international relations, and affecting economic trends at national, regional and international levels. Brought to the fore by grievances of a plurality of citizens who feel left out of mainstream politics and economy, the new political trend and its economic philosophy are generating antagonistic approaches and actions of various actors, leading to numerous clashes of interest, intention and outcomes. Indeed, the main feature of the current context is the numerous clashes being either in incubation phase or out in the open.

Bucharest Forum 2017 offers a platform for the various actors to meet and discuss their interests, approaches and goals, analyze potential and existing clashes, their implications and results, and look for ways to maximize the potential benefits of diverging views and mitigate the consequent negative impact.

The agenda of the Forum is structured around an overarching theme, Center and Periphery – Bridging the Divide, and the discussion will focus on its economic, financial and societal implications. The themes brought forward by this year’s Bucharest Forum are:

The Young Strategic Leaders Forum aims to create a space of discussion and a work group for young professionals of the Aspen and GMF Fellows and Alumni communities that are committed to generate innovative and up-to-date analysis, and to contribute with groundbreaking perspectives and strategies in areas like foreign affairs, international relations, global economics and international public policy. This initiative aims to create practical contributions to the rotating presidency of the Council of the EU, with an ultimate goal of creating a community.

Central and Eastern Europe has become an increasingly troubled and complicated region, with serious security challenges, increasing illiberal tendencies and strong geopolitical competitions. Romania’s geographic and geopolitical location between East and West offers its challenges and opportunities, while its economic trajectory and strategies give the country a renewed importance in the region and with its partners. The panel will look at some of these tendencies and strategies, and their implication for and benefits to Romania’s current and potential partners.

EU is facing a turbulent period, marked by centrifugal forces and processes, by a surge in populist discourse and illiberal tendencies. Many hope that, with the cycle of important European elections over, more clarity will be brought to its political landscape and new vigor to its leadership, taking the Union to its next level. The international context requires a determined and strong Europe, true to its values and beliefs. Europe needs to manage immediate threats and crises while determining and pursuing its long term vision and strategy. The panel is shaped to address both long term approach (first part) and immediate goals of the next two years (the second).

… Beyond the Next Two Years

Europe South-East and East remain victim to complicated internal politics, difficult relations between countries and, most importantly, diverging interests and influences of external actors. Countries (or governments?) react and adapt differently to all these pressures, hedging their orientation and policies to ensure long-term positive outcomes, or at least mitigate problems. Ideology and values are used to shape the best adapting strategy, creating complicated regional mosaiques. The first part of the panel will look at countries in Europe’s South-East, divided along many lines, while the second will analyze the situation in Europe’s East, where one major actor is keen to conquer the region, both metaphorically and literally.

A: Europe and the US – The Stress Test (Enescu I Room)

B: From Normandy to Tiraspol: Nothing New? (Enescu II Room)

Europe’s security faces multiple challenges posed by state and non-state actors to the South, to the East and from within the continent. At the same time its decades long dependence on the US partner seems is increasingly challenged by European voices asking for more European defense. The panel will look at these new tendencies and their political, security and economic implications.

China’s BRI project is getting more and more traction, as it grows both geographically and investment wise. It has become an important economic opportunity for the countries it involves, and of interest to the EU and other partners. The panel will look at the newest and future developments of the project, and at its economic and political implications, challenges and opportunities.

The panel discusses new, clean ways of producing energy. Technologies such as smart, integrated, digitalized grids, and the analysis of big data are leading to the emergence of prosumers and creating efficiency on the market while contributing to environmental sustainability. Embracing these innovations provides a major economic opportunity for Romania and the region. The panel also presents the white paper of Aspen Energy Lab, an Aspen Public Policy Program dedicated to emerging leaders in energy. This year, the paper focused on vulnerable consumers and energy poverty in the context of negotiations for the “Clean Energy for all Europeans” package proposed by the European Union.

15:45 – 16:30      Interactive Session with Steve Clemons, Washington editor at large for The Atlantic and editor of Atlantic Live – Where Would It Break First?

Technology has reached the point in its development when it affects and may change industries, economies and societies. These changes require adaptation, and consequently public policies that foresee these changes and propose measures that maximize the benefits they yield and minimize the negative impact. The panel will look at the possible short-, medium- and long term changes of this nature, and their economic, political and social implications.

Moderator: Steve Clemons, Washington editor at large for The Atlantic and editor of Atlantic Live

The photography exhibition Black Sea Diaries is part of a photo-video documentary project based on a journey around the extended Black Sea region that was completed in 2017. Its purpose is to discover the lives of ordinary people. While the region continues to be dominated by external conflicts and internal tensions, people still share the same joys and sorrows. They move across the region following their passions or they stay at home and build houses, families, communities, creative lives. The area’s cultural richness often attracts other settlers.

They are the people for whom policies are made. They do not determine borders. Instead, they create small universes in which they pursue the right to be happy. They are the #PeopleOfTheBlackSea

Ali Aslan is a Berlin-based presenter, talk show host and journalist who has worked for global TV networks such as CNN, ABC News, Channel News Asia and Deutsche Welle TV. A former policy and media advisor to the German government, Aslan holds masters degrees in Journalism and International Affairs from Columbia University and has received […]

Bogdan Balaci holds the position of General Manager for Philips Lighting SEE that became globally Signify in May 2018, being responsible for developing and implementing the company strategy in Romania and in other 10 countries in South Eastern Europe. One of his major objectives is to consolidate at the local level the company’s position as […]

►           Valeriu Binig is a Partner within the Advisory Department in Bucharest and the Country Energy Industry Leader ►           Valeriu has 31 years of professional experience in the energy sector and he joined EY in 2014, after 6 years as Corporate Finance Director with Deloitte ►           He graduated the Power Engineering Faculty of Bucharest “Politehnica” […]

Wayne J. Bush is Assistant Secretary General for Executive Management. He has overall responsibility for management of the NATO headquarters, and is the Secretary General’s primary advisor for NATO-wide management issues. From 2009 to 2013, Mr. Bush served as Director of the NATO Office of Resources, supporting decision-making by NATO’s 28 member states on matters […]

Speaker
Secretary of State, Ministry of Foreign Affairs of Romania

Nicolae-Ionel CIUCA was born on 7th Feb 1967, in Pleniţa, Dolj County, Romania. He graduated the “Tudor Vladimirescu” Military High School in 1985, and “Nicolae Bălcescu” Land Forces Academy in 1988. His education and training were closely connected to his appointments as he subsequently achieved various positions from platoon leader up to battalion and brigade commander […]

Liz Claman joined FOX Business Network (FBN) as an anchor in October 2007. She anchors Countdown to the Closing Bell with Liz Claman (weekdays 3-4PM/ET). Her October debut on FBN included an exclusive interview with Berkshire Hathaway CEO and legendary investor Warren Buffett. Throughout her tenure at FBN, Claman has conducted exclusive interviews with every […]