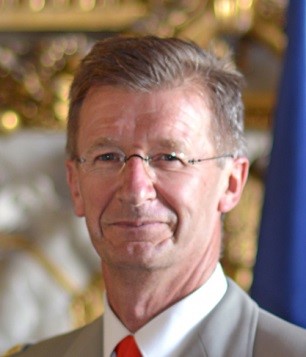 Lieutenant General Patrick Destremau has been director of the Institute for Higher National Defence Studies and Higher Military Education since 1 September 2018.

Throughout his career, he has alternated roles of responsibility in management or operational commands with periods of training.

Previously, he oversaw the reform of the armed forces command and represented the Chief of Defence Staff in the ministry’s governance reform (2011-2014). He was Secretary General of the Officer College for Operational Coherence (2010-2011), officer in charge of the “Scorpion”programme to renew ground combat capacities (2007-2010) and architect of ground forces information systems (2002-2004).

He was Commander of the Light Armoured Marine Regiment (RICM) from 2004-2006. Most notably, he was Chief of Battlegroup 1 in the Republic of Côte d’Ivoire from October 2004 to February 2005 when, during the events of November 2004, he and his unit were tasked with evacuating French nationals under threat in the city of Abidjan.

He was Deputy Chief of “Operations” for the High Command Joint Chiefs of Staff in New Caledonia (2000-2002), notably in charge of operations, state action at sea and the development of international military relations with regional states (Australia, New Zealand, Melanesia).

From 1984 to 2000 he held numerous operational roles, in particular at the RICM (Platoon Commander, Squadron Commander, Head of Operations Bureau). During this time, he took part in a range of operations in Sahel and Central Africa, the Balkans and the South Pacific.

He joined the Special Military Academy in Saint-Cyr-Coëtquidan in September 1981. Upon leaving, in 1983, he joined the Training School of the Armoured Cavalry Arm (EAABC) in Saumur.

He is an Engineer of the Special Military Academy in Saint-Cyr, the Higher National Academy of Telecommunications (Sup’Telecom) and holds a diploma from the War College. He is a former attendee of the Institute for Higher National Defence Studies (IHEDN) and the Centre for Higher Military Studies (CHEM) between 2006 and 2007.

Lieutenant General Patrick Destremau is a Commander of the Legion of Honour and the National Order of Merit. He has been awarded the Cross of Military Valour with a palm and an army corps citation.

He is married with five children and was born in Algiers in 1960.