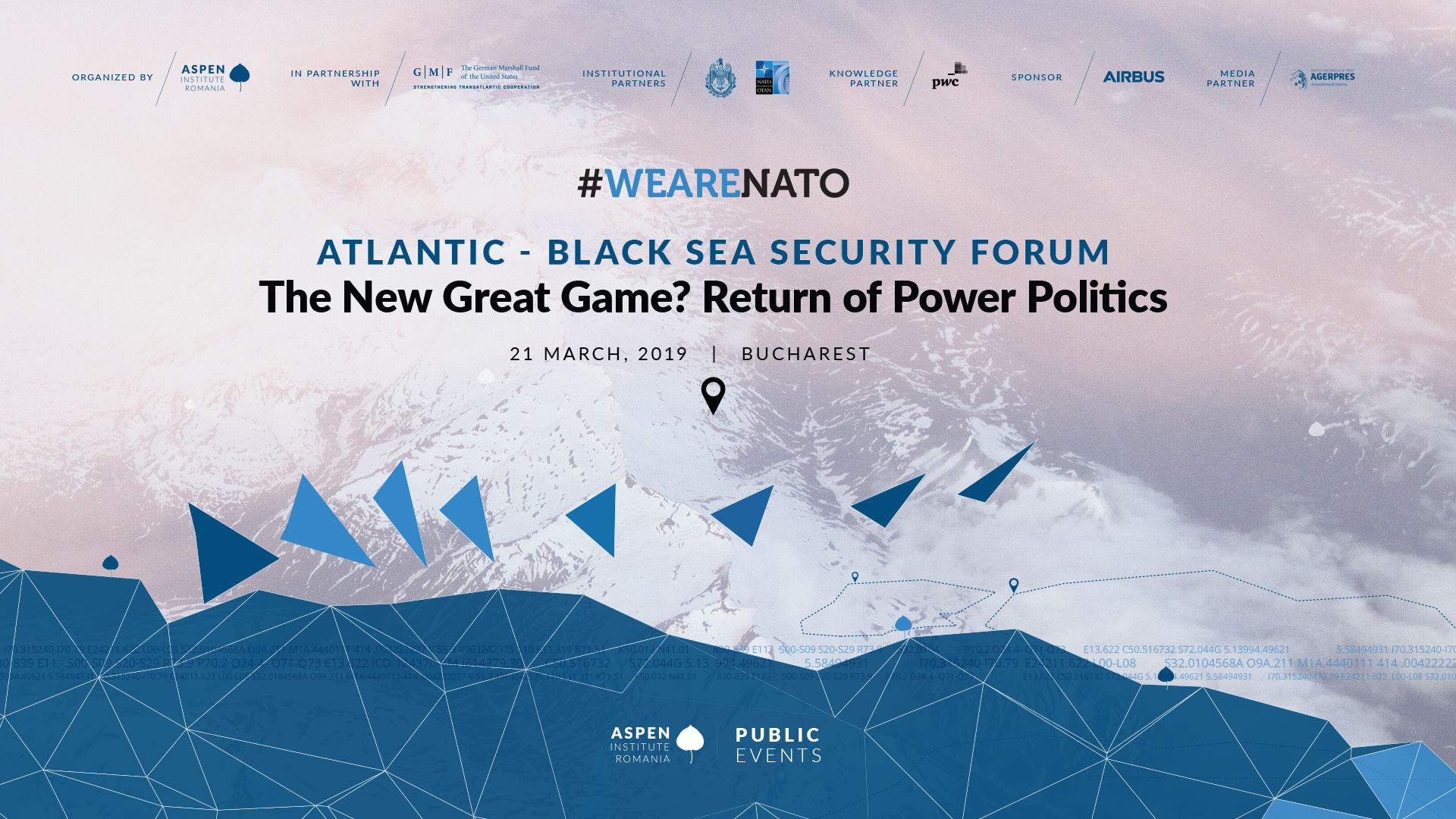 The Aspen Institute Romania together with the Bucharest office of the German Marshall Fund of the United States are organizing the Atlantic – Black Sea Security Forum 2019, a high level international event, part of the Aspen National Security & Defense program, to be held  on March 20-21, in Bucharest.

Moreover, the Common European Security and Defence Policy has made its way into European vocabulary, yet little action and strategy are behind the words, despite the increased need for vision and determination in this direction. In this context, the 70-year celebration of NATO this year offers an ideal opportunity for a new security outlook and for the design of enhanced cooperation with the EU to address them. Within this framework, the 2019 edition of the Atlantic Black Sea Security Forum will provide a platform for comprehensive political discussions not only on the new, more aggressive challenges and stringent needs, but also on solutions for each and, ideally, all of these issues. Given the complex nature of security in today’s world, the main themes of the debate will be the European defense and the Brexit effect, Hybrid warfare and coordinated response, the militarization of Azov and Black Seas and the Middle East challenge.

The 2019 edition of the Forum enjoys the key support of:

10:10 – 12:40 – European Defense – Old and New Actors, Strong and Weak Alliances
The geopolitical space affecting and affected by Europe is undergoing major changes, with new actors taking the scene and old actors developing new attitudes and relations. The constant pillar of European security, the transatlantic relation, is under strain, as deep as the US President threatening withdrawal from NATO. Internal European defense a controversial matter.

10:10 – 11:10 – Transatlantic Relation – Sharing the Same Objectives?
The past few years have seen a growing tension between the allies on the two continents, with diverging and even conflicting views of and approaches to security, among others. Beyond the current divergences both sides of the Atlantic still share the same goals and objectives. Or do they? Are current divergences only temporary disagreements or long term splits on fundamentals of trans-Atlantic world, security included? What is the likely outcome? Can damage be mitigated, and how?

11:20 – 12:40 – European Defense in a Troubled World
Although discussion of a European defense is not new, over the past few years it has been ignited by the divergences between the US and its European allies. While the goal of a common European defense is attainable in principle, there are immediate threats and challenges that need addressed. How can the long term goals and short term threats be managed? In an Europe troubled by internal developments – Brexit, cyber-attacks, hybrid and classic wars at its borders, growing Euroscepticism among political elites – can a common defense agenda be developed and implemented?

12:40 – 13:20 – The Advantages and Challenges of Maturity – NATO@70
This year NATO turns 70. It is in this time of maturity that the Alliance faces unprecedented dynamics – a strained relation between the US and its European allies – and unexpected challenges – Russia, the Middle East, as well as developments within both the US and the EU. At the same time, NATO continues to enlarge, to project power where needed, to tackle new threats – hybrid, cyber. What is the outlook of the future of the Alliance? What should it do to get to 80, and still be active, dynamic and relevant?

14:20 – 15:20 – The Age of Uneasy Peace – Greater Middle East and Afghanistan
The new power game in Greater Middle East and the announced withdrawal of the US troops make a peaceful solution to conflicts in the area seem even more distant. Events in the area directly affect Europe, not only through migration and its massive political and social impact, but also through security threats and complicated conflict resolution. What are the likely outcomes of a withdrawal of US troops from the area? Should Europe be more worried, and should it be more active? How?

15:30 – 16:50 – Two Seas, Same Threat: Deterrence in the Azov and Black Seas
Since 2014 the Black Sea became a militarized area, host of an open conflict. Russia’s latest adventures in the Sea of Azov maintain the security challenge in the region, and raise awareness of Russia’s political and economic motives, beyond the obvious military ones. NATO’s response has been firm, although some argue not substantial enough, and made clear the Organization’s position on Russia’s behavior in the region. What would a better deterrence look like? Can NATO be more resolute, and how?

Speaker
Professor, Dean of the College of Communication and Public Relations

Dr. Alina Bârgăoanu is a Romanian communication scholar, Dean of the College of Communication and Public

Antonia Colibasanu is a senior geopolitical analyst, focusing on strategic competitive intelligence analysis. She is Geopolitical Futures’ Chief Operating Officer. She is responsible for overseeing all departments and marketing operations for the company. Colibasanu has joined Geopolitical Futures team as Senior Analyst in 2016, after working for more than 10 years with global analysis firm […]

Thierry holds a master degree in engineering and is a graduate from the French military academy of Saint Cyr. He spent 15 years in French Army aviation as Officer. Attack helicopter pilot, then squadron leader, he completed his military career as head of attack helicopters training at Le Luc army aviation training academy. He joined […]

Levan Dolidze is the Chair of the Georgian Center for Strategy and Development. Prior to his current position, he served as the Ambassador of Georgia to NATO and First Deputy Defense Minister of Georgia where he coordinated the defense transformation and supervised policy planning and Euro-Atlantic integration process. Mr. Dolidze is a former Executive Director […]

Dr. Karim El Aynaoui is Dean of the Faculty of Economics and Social Sciences of the Mohammed VI Polytechnic University. He is also President of the Policy Center for the New South, previously known as OCP Policy Center, a think tank based in Rabat and serves as advisor to the CEO and Chairman of OCP […]

Stephen J. Flanagan is a senior political scientist at the RAND Corporation. He served in several senior positions in government, most recently as special assistant to the president and senior director for defense policy and strategy at the National Security Council (NSC) Staff from April 2013 to September 2015. Between 1989 and 1999 he served […]

Mircea Geoana is the Deputy Secretary General of NATO beginning with October 17, 2019. He is a proeminent public figure in Romania, with a distinguished domestic and international career. Mircea Geoana ran for the Presidency of Romania in 2009. In an unprecedented narrow and contested election, he received 49.6% of the casted ballot. He served […]