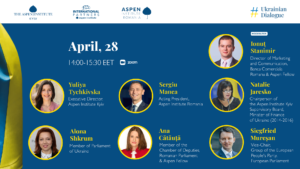 The webinar is designed in partnership with Aspen Institute Kyiv in order to build a live conversation with Ukrainian, Romanian and EU officials. The Ukrainian speakers will be able to share their first-hand experience in dealing with this most tremendous war of the 21st century, while the discussions will also address the implications of the current context on the Romanian and European countries and societies. Following Russia’s illegal military aggression against Ukraine, the economic strangulation of Ukraine’s economy has repercussions on a global scale – from agriculture to steel. Over 4 million refugees have found temporary respite in Europe thanks to the human kindness which met them at the border.

The webinar is part of an ongoing effort that the Aspen Institute Kyiv has been leading since the inception of the crisis in supporting the Ukrainian endeavour to end the war which has already taken the lives of tens of thousands people, making one of every two children displaced from their homes. Thus, the Aspen Institute Romania, as well as the larger network of the Aspen Institutes throughout the world, joined this mission of increasing awareness on the impact of the war in Ukraine and of shedding light onto one of the most extraordinary crises of our times.

Format:
The webinar format will be a moderated discussion between panellists, followed by a Q&A session based on questions received from participants.

Ana Cătăuță is a Romanian politician with significant experience, of over 15 years, in political and institutional communications, public policy formulation and implementation, international affairs, brand management, crisis management. Before becoming a member of the Romanian Parliament in the Chamber of Deputies in 2020, Ana worked as The World Bank in Romania and Hungary’s External […]

Speaker
Chairperson of the Aspen Institute Kyiv Supervisory Board, Former Minister of Finance of Ukraine (2014-2016)

Natalie served as the Executive Director of the Financial Oversight & Management Board (FOMB) for Puerto Rico created under the bipartisan Puerto Rico Oversight, Management and Economic Stability Act (PROMESA) of the USA. Previously, she spent two decades working as Horizon Capital co-founder and CEO. She began her career in public service in the United […]

Since 2014 – MP of Ukrainian Parliament. Alona Shkrum is a Cambridge University graduate (LL.M. in International Law). She has a Master in law from University Pantheon-Sorbonne Paris 1 in France and in the Institute of international relations of Taras Shevchenko National University of Kyiv. Works in the Parliamentarian Committee on taxation, banking and finance. […]