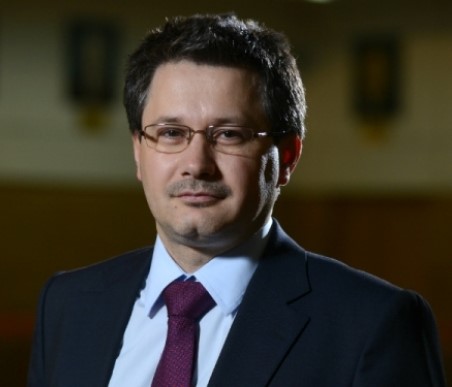 Mihnea Costoiu graduated from the University POLITEHNICA of Bucharest, the Economical engineering specialization, in 1996, and continued his studies in the same field with a master’s degree. Between 2002 and 2003 he followed postgraduate specialization studies, at the National Defence College (Ministry of National Defence, Romania), followed by courses in the field of higher education management, at the Academy of Economic Studies of Bucharest (2011). He is experienced and specialised in management, management in education, administration, negotiation, project management, research projects administration and leadership.
His career in public administration, within the education and research sector, started in 2001, as Secretary General in the Ministry of Education and Research, position which he occupied until 2004. Afterwards, he became Project Manager for the School Infrastructure Rehabilitation Project, an investment project implemented by the Romanian Ministry of Education and Research and co-financed by the World Bank. In 2009 he took on the portfolio of State Secretary within the Ministry of Education, Research and Innovation.

Later, during 2012 – 2014, he occupied the position of Delegate Minister for Higher Education, Scientific Research and Technological Development within the Ministry of National Education. His main activities and responsibilities in this position consisted in the preparation, implementation, monitoring and evaluation of the methodologies and policies in higher education, scientific research, development and innovation. He also coordinated the development of normative and methodological framework, functional, operational, institutional and financial framework necessary to achieve strategic objectives in his activity areas.

As representative of Government bodies/institutions and national, regional and international, as coordinator of the State authority to areas of scientific research and higher education, as well as legal representative of the University POLITEHNICA of Bucharest, he took personal responsibility for professional activities and social commitments.

After finishing his term, in 2015, he resumed his position as rector of the University POLITEHNICA of Bucharest, the largest and the oldest technical university – and among the most prestigious universities in Romania – hosting the largest number of foreign and Romanian students.
Also, in January 2015, in appreciation of the achievements as minister delegate, he was awarded the title of honorary Counselor to the Prime Minister in the EU-funded research projects field, position which he occupied until October 2015.