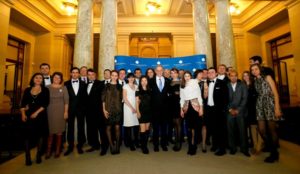 The 2012 edition of the “Aspen Leadership Awards and Gala Dinner”, on December 17 at the CEC Palace, celebrated our achievements in the last 6 years and offered a perspective on our future programs, especially those related to Aspen Romania’s Leadership Programs.

The Aspen Leadership Gala stands as an occasion for those that were instrumental in our creation and successes and those that benefited of our programs and fellowships, to once again come together and reflect on what is the added value of a community moved by shared values and not just interests. The Gala honored the Young Leaders Program 2012 generation for its accomplishments in the past year in the ambitious attempt of producing a significant impact on societies across Central and Eastern Europe.

Also, continuing last year’s tradition, through the Aspen Leadership Awards we acknowledged specific efforts and personal commitment to values-based, creative and transformative leadership of people that have had a significant contribution to the overall advancement of Romanian society.

The 2012 Awards were as follows:
“Values Based Leadership” award: Mr. Octavian Morariu, President, Romanian Olympic and Sports Committee
The “Values Based Leadership” award is presented to a public leader or national organization that has excelled in his field of activity, by constantly supporting and promoting national values and thus shaping Romania’s identity domestically and abroad. The award is conceived as part of an effort by Aspen Romania and the Aspen Network of International Partners to serve those values and to promote better international understanding. In a more and more interdependent world, these ambassadors of national values become instruments shaping an emerging global dialogue of identities.

“Service with Dignity” award: Mr. Ionut Dan Cristea, Ensign/Chief Engineer, Fast Response Cutter, Ministry of Administration and Interior (the only Romanian to have graduated from the US Coast Guard Academy)
The “Service with Dignity” award is presented to a Romanian public servant that has proven constant effort to exemplarily fulfill work duties and go beyond those, as a role model for the community. By their impeccable professional and ethical standards those considered for the award stand as guardians of the good society, as leaders among their peers, and as a source of pride and inspiration to us all.

On the same occasion, we will hosted a Conversation on “The Romanian New Film Wave and its Influence on Romania’s Perception Abroad” with guests like Tudor Giurgiu or Catalin Mitulescu. On one hand, the Romanian New Wave has enjoyed the highest critical acclaim in the past years. It gained the most distinguished recognition at international film festivals and the international press has published ample, complimenting reviews about a surprising number of Romanian films and Romanian directors that have become reference names in the art cinema community all over the world. On the other hand, country branding is one of the hot topics on the agendas of many countries today and one of the most disputed political concepts of our time. The starting point of the discussion reflects on the specific area of cinematography – in which Romania has come to have international visibility and recognition by building a strong reputation among worldwide film professionals – and how influential this achievement was in redefining perceptions of our country abroad. The debate will remind us that the Aspen Institute Romania stands not only as a generator of influential intellectual reflection, but also as a hands-on contributor to the improvement of our society.