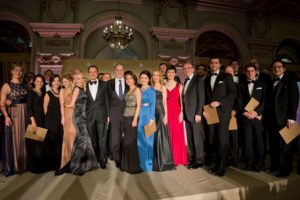 The 2014 edition of the “Aspen Leadership Awards and Gala Dinner”, on December 3, celebrates our achievements in the past 8 years and offeres a perspective on our future leadership, policy and public programs.

The Aspen Leadership Gala stands as an occasion for those that were instrumental in our creation and successes and those that benefited of our programs and fellowships, to once again come together and reflect on what is the added value of a community moved by shared values and not just interests. The Gala honors the Young Leaders Program 2014 generation for its accomplishments in the past year in the ambitious attempt of producing a significant impact on societies across Central and Eastern Europe.

The “Contribution to Romanian Cultural Patrimony” Leadership Award is presented to an individual who through his/her actions has significantly contributed to the enrichment of Romanian culture, promoted Romania abroad and supported the overall development of the country’s cultural patrimony. Aspen Institute Romania, through its cultural activities and involvement, believes that the moral and cultural fabric of nations is essential in achieving the Good Society. Therefore, we encourage you all to support the Romanian cultural heritage as well as the young representatives of all arts in their endeavors.

The “Sports and Society Leadership” Award is presented to an individual who has transformed sports into more than a physical activity. As the great Nelson Mandela put it “sport has the power to inspire, to unite people and it speaks to youth in a language they understand. Sport can create hope where once there was only despair”. We believe that the recipient of this award inspires and offers a model of commitment, dedication and professionalism.

The “Innovation and Technology Leadership” award is presented to a leaders or an organization which brought significant contributions to the Romanian innovation, research or entrepreneurial environment.

Given the long-term challenges that Romania and other countries in Central Eastern Europe face in strengthening their national security by addressing traditional military threats and emerging non-traditional challenges that impend on regional stability, Aspen Institute Romania has initiated the National Security & Regional Defense Policy Program, in partnership with the Bucharest office of the German Marshall Fund of the US.

The program provides support to national institutions, a series of roundtable debates with key decision-makers.