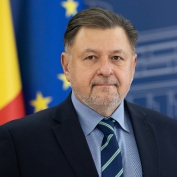 Professor Alexandru Rafila was appointed Minister of Health of Romania on November 25th 2021. He was previously Deputy Speaker of the Romanian Parliament.

Prof. Rafila has served in central administration as Secretary of State, General Director for Public Health and several times as Personal Adviser of the Minister of Health. He is a previous Director of the Public Health Institute Bucharest.

In addition to his standing in his own country, Professor Rafila’s expertise is recognized internationally as expert by WHO, NATO and European Commission. He was Member of Standing Committee of WHO Regional Office of Europe and represented Romania in the Management Board of ECDC. In 2018 he was elected to represent Romania in the Executive Board of WHO.

Towards a Health System Based on Prevention and Innovation 28 October 2022 Hotel Sheraton (Calea Dorobanți 5-7, Bucharest) Aspen Healthcare Summit, now at its eleventh edition, is the major public event of Aspen Institute Romania’s Healthcare & Quality of Life Program, bringing together decision-makers, renowned specialists and researchers from the medical sector, European and national […]